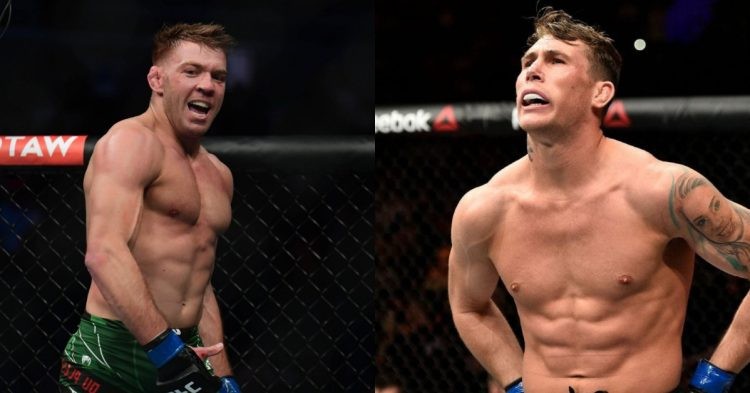 After many delays, Darren Till finally returns to action in December this year. According to a report from ESPN journalist Brett Okamoto, Till will be fighting South African prospect Dricus du Plessis. Brett further stated that all the parties have agreed to the fight and it is being targeted for UFC 282 on December 10th.

Darren Till was set to fight Jack Hermansson on July 23rd in the co-main of the UFC London card. However, Till could not make it to the event as he suffered another knee injury. Hermansson ultimately went on to fight Chirs Curtis on the card.

Once the UFC officially announces the bout, it will be the first time the fans will see Darren inside the Octagon since September 2021. Till’s last fight was against Derek Brunson in the main event of a UFC Fight Night. Till was not fully fit for the contest and it ended in a submission loss for the Brit. As a result of that loss, Till has now lost 4 out of his last 5 fights.

Dricus du Plessis, on the other hand, is undefeated in his UFC career so far. Coming into the UFC, du Plessis had a record of 14-2. He made his UFC debut against Markus Perez, whom he defeated via 1st round KO. He followed it up with two more wins over Trevin Giles and Brad Tavares. Hence, the Till fight is a massive opportunity for him to move up the ranks.

Nicknamed Stillknocks, Dricus (17-2) is ranked 13th in the division while Till (18-4-1) is in the 9th spot. Depending on the result, there will be a major shift in the rankings in the middleweight division.

Can Darren Till get back to winning ways by beating Dricus du Plessis at UFC 282?

UFC 282 is almost 4 months away and it is already shaping up to be a great card. It is speculated that Jon Jones will also return on the same card. There were reports that indicated that Jon will either face Francis Ngannou or Stipe Miocic on the last PPV of 2022.

So the stage is set for Darren Till’s grand return to fighting. Till was one of the hottest British prospects in the UFC. Following Michael Bisping, Till was thought to be the next fighter to become a UFC champ from England. However, things have not gone so well following his loss to Tyron Woodley at UFC 228 for the 170lbs title.

A further loss to Jorge Masvidal made Darren move up to 185lbs. After a bright start against Kelvin Gastelum, Darren fell short against Robert Whittaker and Brunson. So it is imperative for his career that the 29-year-old beats Dricus du Plessis. Dricus is a great striker who lands 6.55 strikes per minute and averages 1.20 takedowns per fight.

Hence, it is certainly not an easy assignment for Darren on his return. But Till himself is an elite striker. On top of that, he is training with Khamzat Chimaev these days at Allstar. One may assume that it has certainly helped Till to round out his ground game a bit more. So it remains to be seen if it helps The Gorilla to add more wrinkles to his game or not.

What do you think? Is Darren Till the favourite heading into the bout against Dricus du Plessis? If not, then how do you think the bout plays out at UFC 282? Let us know in the comments down below!