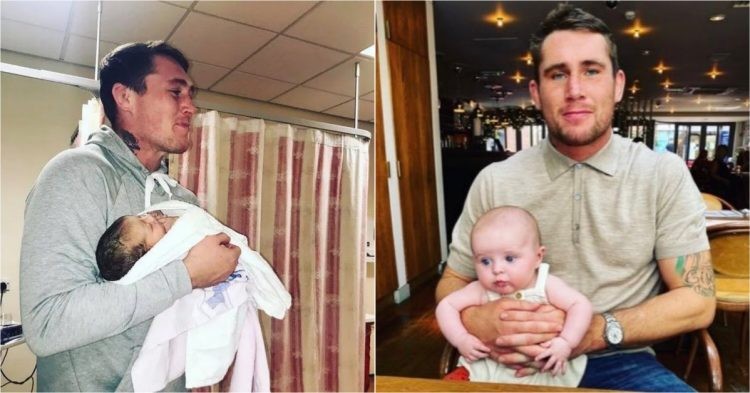 Darren Till is missing his newborn daughter. (Credit: Twitter)

UFC middleweight fighter Darren Till will be back in action this weekend after a long layoff. His last fight was on 4th September 2021. He lost the bout to Derek Brunson via 3rd round submission. However, that fight camp was hampered by a knee injury and Till’s performance was compromised. But, he plans to make a strong comeback at UFC 282 this weekend.

Ahead of his bout against Dricus du Plessis, Till put his all into the fight camp. Recently, Till spoke to Mirror fighting and revealed that he left his newborn daughter behind for the fight camp.

Darren, who is the father of four daughters, had to leave his newborn daughter the day after to focus on the fight. As per Darren, he held his fight camp in Thailand. As a result, he has been away from his family for a significant period of time.

“I had a newborn child about 13 weeks ago and I’ve only seen her once because I flew out to Thailand the day after she was born after for training camp,” said Till.

Till has also changed significantly in recent years. The 29-year-old infamously said that he does not care about his family and he devoted all his attention to fighting. But, The Liverpool native added during the interview that he wants to spend the holidays with his family, instead of going out and partying. Till has matured quite a lot with age and seems to have embraced family values.

The United Kingdom pinned its hope on Darren Till to become only the second UFC champ from the region. He also had a bright start to his UFC career. The Gorilla won 5 of his first 6 bouts in the UFC and earned the maiden championship opportunity of his career. But, Till lost the welterweight title bout against then-champion Tyron Woodley.

Since his win over Stephen Thompson in 2018, Till lost 4 of his 5 bouts. Amongst his losses, Woodley and Brunson submitted the Brit, while Jorge Masvidal knocked him out cold. It made a significant dent in Till’s dreams of becoming a champ. However, he has not given up on his aspirations to become a champ and wants to win the belt for his daughters.

“The mentality doesn’t change, when money isn’t motivating you and it’s the belt… you want your to children to look at one and say that’s what my daddy achieved so they go in school with their heads held high. I’m out here sacrificing time with my kids, there’s a big purpose for it. I’d love to be home now with my kids watching Christmas films, but I’ve got purpose now.”

Darren Till’s striking is certainly the strong point of his game. However, as the submission losses suggest, Till needs to tighten up his ground skills. However, his alliance with UFC superstar Khamzat Chimaev may provide him with the necessary directions to improve his grappling. His opponent on December 10th, Dricus du Plessis, has 9 submission wins in his career. So Darren’s wrestling will certainly be tested in his comeback fight.

What do you make of Darren Till’s comeback? Do you think he can get back to winning ways at UFC 282? Let us know in the comments down below.