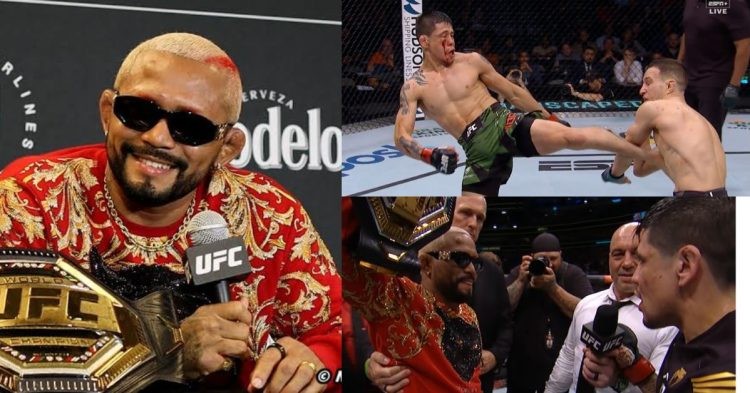 Brandon Moreno picked up a terrific knockout win over Kai Kara France in the co-main event of UFC 277 and became the new interim flyweight champion. Following his impressive win, the Mexican flyweight called out the undisputed champion Deiveson Figueiredo in the post-fight interview and the two fighters verbally agreed on the fourth fight in Brazil.

One day after the conclusion of the UFC 277 PPV, Deus De Guerra sat down for an interview with Ariel Helwani at the MMA Hour show and shared his thoughts about Moreno’s performance against Kai Kara France. Figueiredo was critical of Brandon’s performance and made a bold claim that the Mexican had shown no signs of improvement.

“Brandon looked the same he always has. He’s never changed his game. It’s always the same and I have the antidote for him.”

It seems like Deus De Guerra has found more holes in the Mexican’s striking game after watching his fight against Kai Kara France at UFC 277. However, Moreno and his team will also have new plans and it would be fascinating to see who comes out with a better strategy and wins the fourth fight.

After Deiveson Figueiredo shared his thoughts on Brandon Moreno’s performance against Kai Kara France at UFC 277, Ariel Helwani asked Deus De Guerra what was going through his mind when he walked to the cage during the post-fight interview.

“When I entered the cage, I entered the cage with rage. I’m always looking for a knockout but Brandon was so sweet there in the interview, it was contagious and it kind off rubbed off on me. It kind off calmed the beast in me but now I’m back. The rage is back and I’m gonna come for the knockout in the fourth fight.”

In their last meeting at UFC 270, The Brazilian flyweight was very effective when it came to striking as he dropped Moreno thrice. However, Figueiredo couldn’t finish The Assassin Baby and the trilogy fight went to the judges’ scorecard.

But judging from his confidence in the interview with Ariel Helwani, one thing that looked certain is Figueiredo wanted to annihilate Moreno and put the rivalry to bed. Do let us know in the comments section who you think will win the fourth fight between Deiveson Figueiredo and Brandon Moreno.