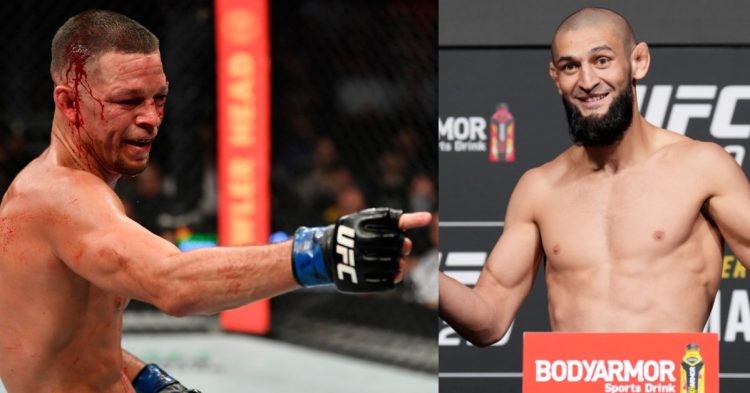 Nate Diaz claims he has made Khamzat Chimaev retire from the welterweight division!

Khamzat Chimaev recently announced that he will be moving away from 170lbs. It comes on the heels of him missing weight for his fight against Nate Diaz at UFC 279. The fight was at welterweight and Chimaev came in at 178.5lbs; missing weight by 7.5lbs. The margin was so high that the UFC had to cancel the main event and book a new fight completely.

So why did such a mishap happen? Coach Andreas Michael later revealed that Khamzat had a torrid time cutting weight this time. Although he has fought at the weight of 170lbs 3 times previously, Chimaev’s body was not reacting to the weight-cutting process this time. Michael revealed that Chimaev was throwing up constantly and his body was cramping up.

Hence, the decision was taken by the coach himself to not let Khamzat cut weight any further for his own safety. Both Chimaev and Michael have confirmed that his next fight will be at middleweight.

However, his original opponent for UFC 279, Nate Diaz thinks The Borz will move to 185lbs because of him! Diaz commented on Chimaev’s move to middleweight and stated, “Duh I retired u from 170 dumb f**k”. (h/t via best.casual.mma)

Regardless of what may have gone down during the weigh-ins, Khamzat Chimaev put on a masterclass in the co-main event of UFC 279. He had to fight Kevin Holland as his new opponent after the weight miss. Although Holland is a completely different opponent to Nate, it did not matter to Khamzat one bit!

The 28-year-old just shot for a takedown and had no respect for Kevin’s Brazilian Jiu-Jitsu skills! Chimaev snuck in a D’Arce choke and tapped out Kevin in the first round itself. After the fight was over, Khamzat watched the main event from backstage and regretted not making weight. He thinks he would have killed Nate if the fight happened.

Fans share the same sentiment as well! Underneath the Instagram post, many fans stated that the 37-year-old is making such public statements only because, he will never have to find himself standing across the Chechen fighter ever again. While some called Nate delusional, others say the younger Diaz brother is lucky to not have fought Khamzat.

One user by the handle of @leandro_urbina55 wrote, “Diaz got away with his life and starts talking h*t smh.”

@ghetto_cowboy77 stated, “What? Lol Nate got lucky the fights changed.”

Finally, @herrerrera wrote, “Delusional. That is what comes with CTE. You start to think irrational.”

What are your thoughts on Nate’s comments? Do you think Nate Diaz is right about Khamzat Chimaev moving upto middleweight because of him? Or, do you agree with the fans? Let us know in the comments down below.