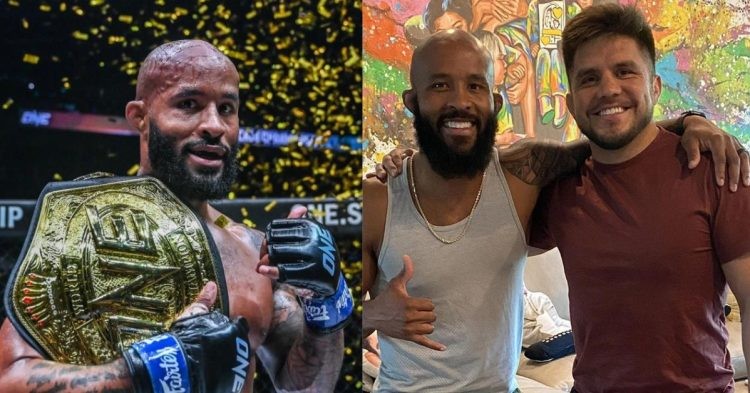 Former UFC champ and Olympic gold medalist Henry Cejudo got a FaceTime from MMA legend Demetrious Johnson after his big win at ONE. Cejudo reacted excitedly when his former foe Johnson knocked out Adriano Moraes in their rematch and captured the ONE Championship flyweight title.

This time ‘Mighty Mouse’ avenged his knockout loss to Moraes back in 2021, when he lost the first fight via a vicious knee that broke Johnson’s win streak in ONE. And surprisingly, Demetrious won their rematch by knocking out Moraes with a knee.

Henry posted a video on his YouTube channel and reacted to Johnson’s knockout victory. The former UFC champ  Cejudo said:

“What made that knee so beautiful is that you could’ve thrown a punch but you chose the knee.

People don’t know that IQ, you know what I’m saying? You literally patiently waited and then whack!”

Before the rematch on August 26, Johnson called in the assistance of Cejudo to help him train better. Henry is known for his elite wrestling and high fight IQ. Johnson and Cejudo were formal rivals back in their UFC days.

But ahead of his fight at ONE, they put aside their rivalries and trained together to get better. When Johnson used to compete in UFC, ‘Triple C’ had famously put a stop to Johnson’s 11-fight consecutive title defense streak when he beat him at UFC 227 to capture the flyweight belt.

Demetrious Johnson lost his One Championship flyweight title to Adriano Moraes in their first fight back in April 2021. This was the only knockout loss of his career and in their rematch, Johnson had hoped to avenge his defeat and retain the flyweight title.

‘Mighty Mouse’ got the better of this fight as he appeared more confident as the fight began to go in late rounds. Reacting to the victory during his post-fight interview, Johnson said:

“It feels good, baby. I truly believe that I’m still getting better at 36. It’s because of the team I surround myself with… I still plan on getting better.”

Right from the beginning, Johnson began to push the pace and controlled the fight while both of the fighters were very explosive. ‘DJ’ focused more on utilizing outside leg kicks and his excellent footwork and lateral movement to keep ‘Mikinho’ on his toes.

In the last round, Johnson managed to land a big right hook on Moraes which wobbled the champion. With about a minute left in the final round, Johnson capitalized on the moment, landing a thunderous flying knee to knock out his opponent and win back the ONE Championship flyweight title.