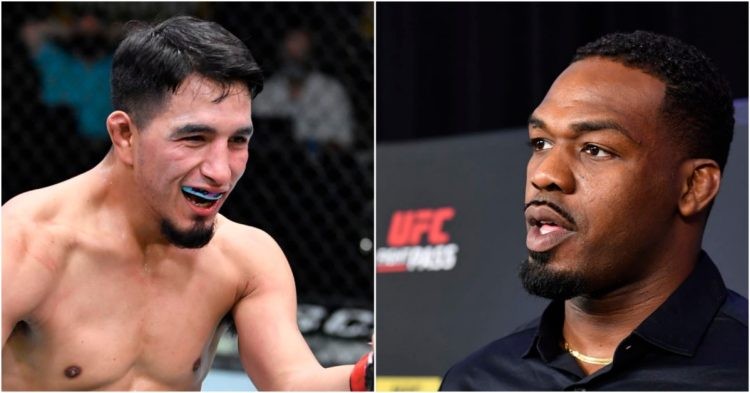 UFC bantamweight fighter Adrian Yanez was recently trolled on Twitter! Former UFC light heavyweight champ Jon Jones is edging close to his return. There are reports that Jon will return to the UFC at UFC 285. It is also widely theorized that Jon will take on the recently fit UFC heavyweight champ Francis Ngannou. So fans are extremely excited to witness the dream fight.

However, a fake Twitter account recently caused the fans to worry about the fight happening! ESPN’s mixed martial arts-related tweets are usually tweeted out from their official Twitter account, ESPN MMA. Being the official Twitter handle of the UFC’s broadcasting channel, they do not report any speculative news. Hence, whatever they report, is pretty much the real deal.

But, it also does invite some impostors as well. Recently, a fake Twitter account impersonated ESPN MMA on the micro-blogging site. The particular account reported that Jon Jones would serve a 15-month USADA ban. Much like many other fans, Arian Yanez was also fooled by the troll account. When he realized his mistake, Yanez quickly deleted the tweet.

Deleted 🤣
They got me good lol.

The 29-year-old had a sense of humor about it. He saw the funny side of it and accepted his mistake.

Jon Jones has a history of testing positive for PEDs

Although it was just a fake report that fooled Adrian Yanez, considering Jon’s history, Yanez can be forgiven. Jon Jones has a very extensive history of failing drug tests. Not just drug tests, Jones had a lot of trouble with the law in general. Earlier in 2021, Jon was arrested for domestic violence as well. As for his drug tests, Jon Jones has tested positive for PEDs on multiple occasions.

The biggest instance of Jon’s drug failure was in 2016, just ahead of UFC 200. At the event, Jonny Bones was scheduled to face his arch-rival, Daniel Cormier. However, the bout ultimately did not happen as Jon tested positive for clomiphene and letrozole. He had to serve a year of suspension because of it. DC went on to fight Anderson Silva at UFC 200 instead.

But, DC and Jon did fight at UFC 214. Jon won the fight as he viciously knocked out Cormier. However, tragedy struck once more as Jones tested positive for turinabol steroid. As a result, Jones was stripped of the 205 lbs belt and was handed a lengthy suspension. But later, it was proved that Jones’ did not dope intentionally.

Aside from these two instances, Jon also tested positive for a cocaine-related substance in 2015. However, he was only fined $20,000 as it was not on the list of banned substances for athletes. He also had a positive test just ahead of UFC 232. But USADA explained that it was because of pulsing. Hence, Jon was not penalized.