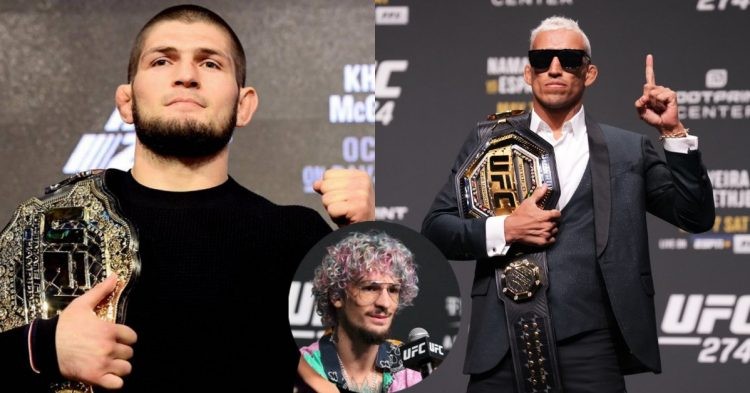 Former UFC Lightweight Champion Khabib Nurmagomedov retired in 2020 with an unbeaten record of 29-0. Following his bout against Justin Gaethje at UFC 254, Khabib hung up his gloves and decided to walk away despite being at the peak of his star power. However, according to bantamweight fighter Sean O’Malley, Charles Oliveira may have contributed to Khabib’s decision.

After Khabib’s retirement, the fans wondered who the next dominant lightweight champ would be. While some thought Conor McGregor was the favourite to win the belt once more, others picked fighters like Dustin Poirier and Tony Ferguson.

But none had the name Charles Oliveira in their minds. Not only did he rise to prominence, but Oliveira also ran through the entire division. He beat Dustin Poirier, Michael Chandler, Justin Gaethje and Tony Ferguson since Nurmagomedov’s exit from the sport. At UFC 262, he beat Chandler to win the 155lbs belt.

Although both of them have entirely different fight styles, Charles reminds the fans a lot about Khabib. Just like in Khabib’s fights, the result seems inevitable even before the contest starts. Hence, there has been a lot of speculation on how Oliveira would fare against Khabib. According to Sean O’Malley, the Brazilian is the only tough fight left in the UFC for Khabib. He said,

“I think Charles is the only one that can really give Khabib problems and, who knows, maybe that’s why Khabib stepped away… Maybe he saw, ‘I don’t want that guy.’ Who knows, but yeah, that’s one fight that I would be interested in seeing Khabib come back for. It would be a massive fight.” (h/t via Combatalk)

Although the claims that Khabib retired because of Oliveira may be a bit far-fetched, Sean’s claim of Oliveira being a problem for Khabib may just be accurate. Khabib has mostly fought fighters who are not the most dominant grapplers. Although the likes of Conor, Dustin and Justin were a threat to him on the feet, none could hold their own on the mat.

That is where the bout against Charles Oliveira becomes probably the most in his career. Charles has shown that he can be one of the most dangerous strikers in the division. He hurt Justin and Chandler with strikes during their fights at UFC 262 and UFC 274.

And his grappling credentials are undoubtedly perhaps the best in the division. Charles holds the record for the most amount of submissions in the UFC history. Hence, he is certainly good enough to go strength to strength in grappling as well. Khabib has not fought anybody like him. So the interest in seeing the fight is certainly understandable.

Unfortunately, Khabib has repeated multiple times that he is not going to fight ever again. So the possibility of the bout taking place is slim to none. Nurmagomedov is only interested in coaching a season of TUF, whereas Oliveira wants to fight Conor McGregor next. Hence, this may just remain a dream fight that the fans will never get to see.