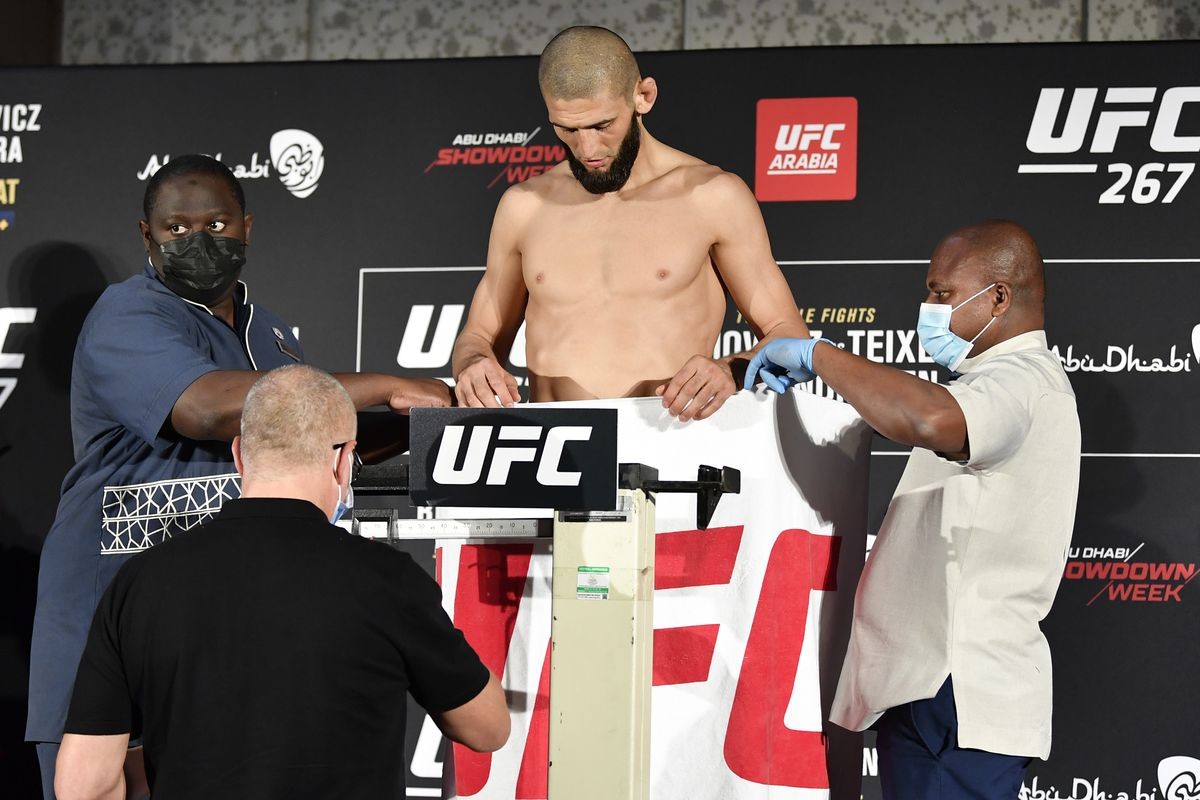 In less than two days time Khamzat Chimaev will make his much-anticipated return in the UFC after a one-year layoff. The Swedish fighter will go head to head against Li Jingliang in a three-round contest in the main card of UFC 267.

However, as we lead into this fight there is some drama surrounding this welterweight clash. Going into the weigh-ins, Khamzat Chimaev who had recently recovered from covid-19 struggled to make weight for this fight.

Khamzat Chimaev was .5 pounds heavy on his first weigh-in attempt – while touching the towel? ????

He missed the weight for the fight on his first attempt. The Borz weighed 171.5 and barely missed the weight limit by 0.5 pounds. Although it appeared as if Khamzat was cheating during the weigh-in as he held the towel. But none of the officials observed this and let him go. Consequently, the welterweight fighter was given an hour to cut weight.

Khamzat Chimaev returned to make weight for the second time after 45 minutes. On his second attempt, Chimaev looked very exhausted as he stripped down naked and stepped on the scale. Surprisingly the scales indicated 166 pounds. After seeing this the officials were astonished and couldn’t believe that Khamzat lost five pounds in 45 minutes.

TOWELGATE II? Controversy in Abu Dhabi after Khamzat Chimaev fluctuates five pounds during his second weigh-in. Did he hold the towel? pic.twitter.com/UNu8fZCu9E

UFC weigh-ins coordinator Heidi Dean’s reaction was “One what? What is it?” she asked out loud. “Sixty-six? He lost five pounds?”

But it was visible that the Swedish fighter was trying to lean on the towel to make weight. Therefore it was very clear that Khamzat’s significant weight loss had something to do with him trying to cheat by holding the towel. However, the official deemed it as “Something wrong with the scale.”

Consequently, the Swedish fighter was called again to weigh in for the third time after the scale give an incorrect reading. Although this time the scale operator immediately signalled Khamzat Chimaev to raise his arms above the towel.   The Swedish fighter obliged and he finally managed to make weight as the scale showed the 171-pound mark.

There is no doubt that the UFC 267 weigh-ins was a complete mess as Khamzat Chimaev tried to outsmart the officials by holding the towel. So comment below your thoughts on this entire weigh-in situation of Khamzat.