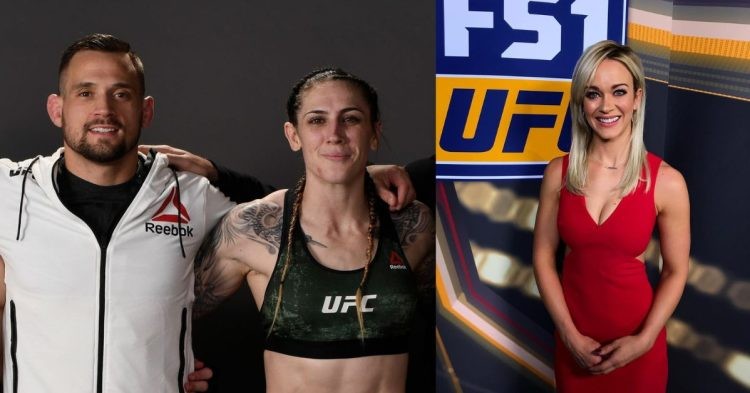 Anderson parted ways with the promotion after her loss to Amanda Nunes back in 2021. Recently, She took to her social media pages and stated that she was not given proper training and enough preparation for her title fight against Nunes, while she was training under Glory MMA.

After her statement on social media, a fan commentated: “Imagine going to Glory MMA of all places for proper coaching and then somehow sleeping with James Krause, Lord have mercy.” Anderson then replied, hinting at an affair between Sanko and Krause: “You should look at Sanko about that actually..”

Sanko is married to Nathan Sanko for a long time and was not known to have been in any serious relationship with another person. Meanwhile, Krause is married to his wife, Shynel Krause. Anderson and Sanko used to be close friends and train at the same gym. Sanko still trains at Glory MMA. It is not known how and why things turned sour between Sanko and Anderson.

Sanko is currently the UFC’s lead reporter and fight analyst. She is best known for her broadcasting and reporting career, but she has been a color commentator in Dana White’s Contender Series. Other than that, Sanko also fought at Invicta FC 4. She won her only fight in professional MMA against Cassie Robb by submission back in 2013.

Who is Laura Sanko’s Husband?

Laura Sanko is married to Nathan Sanko, who is an entrepreneur. As Laura likes to keep her personal life private, further details about their married life are not known. However, as per sources, they met in 2006 and tied the knot in 2012.

Laura’s husband, Nathan is a successful businessman and studied Economics at the University of Arkansas. He is currently involved with multiple companies like Back 2 Basics Beef, Movista, No Limit Safety, LLC, and Leggera Technologies, LLC. Nathan is also the CEO of No Limit Wheels, LLC, a manufacturer specializing in golf cart wheels.

Like her husband, Laura has also ventured into business. Apart from her UFC broadcasting and reporting career, Laura is the founder of Grassy Pants Beef, LLC. This company sells purely grass-fed, hormone-free, all-natural steak.

The accusation from Anderson about the alleged affair between Laura Sanko and her former coach, James Krause has divided the fight fans. Sanko is very popular among UFC fans and a statement like that is sure to be nothing less of a shock.

Some fans are taking Sanko’s side and questioning the authenticity of the allegations. One user left a comment: “Unnecessary to attack the queen Sanko like that!!! She’s innocent.” Another fan commented: “Sanko is one of the best commentators they got. Hard enough to get in the door, and now she has to deal with this foolishness.”

Unnecessary to attack the queen Sanko like that!!! She’s innocent

Lmao, she’s currently Dana’s cumrag. I don’t doubt this at all

While other fans are not surprised about this at all and believe that this might be true. One user stated: “Not surprised. If you think partying with the UFC executives after every big card aboard, has nothing to do with where she’s at the moment, you’re bugging.” Another fan commented and implied: “Sanko sleeping with everyone baby.”

Not surprised. If you think partying with the UFC executives after every big card aboard, has nothing to do with where she’s at at the moment, you’re bugging.

Sanko sleeping with everyone baby

The real story is not known but if this is true then this is a big shock to the sincere fans of Sanko and the whole MMA community.