Diego Sanchez used to be a force to reckon with during his early years with the UFC. Sanchez got into many heated rivalries and fought some of the most fighters of his generation. It’s hard to ignore Sanchez’s contribution to the expansion of UFC. Diego Sanchez’s rivalry with the elder Diaz brother, Nick Diaz is quite famous. Both Nick and Sanchez faced each other at The Ultimate Fighter 2 finale. Diego Sanchez picked up an impressive unanimous decision win over Diaz to pick up his 14th straight win in MMA.

Diego Sanchez recently took a jab at Diaz. Sanchez claimed that Nick Diaz hated him and would try to do everything to get under his skin. Sanchez also claimed that Diaz foul-mouthed his mother and father in the E-mail he used to send him. 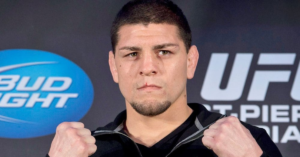 Diego Sanchez picked up a rather impressive victory over Diaz back in 2005. He dominated Diaz on the ground and proved to be a very tough challenge for then rising prospect Nick Diaz. There ought to be bad blood and heated rivalries wherever the Diaz brothers are involved. Additionally, back in the day, Nick Diaz was known for his notoriety inside the octagon. It’s not hard to believe Sanchez’s words on Nick Diaz. It’s hilarious to think that at a time when there were no social media, Nick Diaz used E-mail to trash talk his opponents.

Sanchez claimed that Diaz always hated him and did everything to get under his skin. Sanchez picked up a rather impressive victory against Diaz when they came face to face against each other inside the octagon. Sanchez dominated Diaz on the ground, and picked up a spectacular unanimous decision win. Diaz is currently out of action and its very unlikely that he will make his return soon. On the other hand, Diego Sanchez has been faring well with three victories in his last four fights.