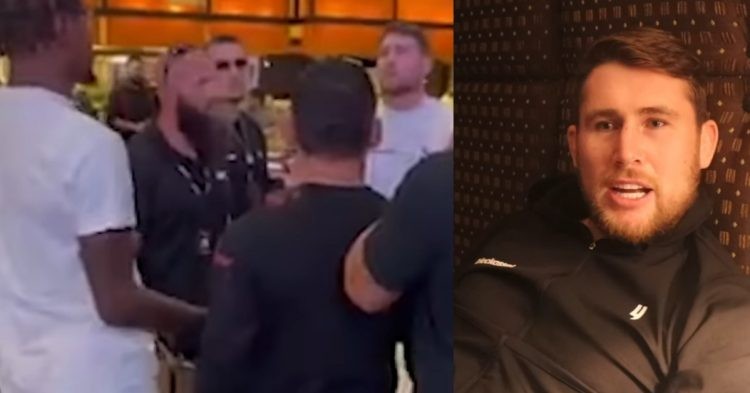 Darren Till and Kevin Holland had a heated argument backstage during the UFC 279 press conference.

Coming into the weekend, the headlines were primarily dominated by speculation about Nate Diaz‘s future with the UFC. But things have certainly heated up as the event has gotten nearer. The most significant case was seen ahead of the UFC 279 press conference.

According to multiple reports, there was a brawl backstage ahead of the press conference for the upcoming PPV. Ariel Helwani took to Twitter to explain the situation. As per Helwani, Chimaev seemed agitated by some past comments by Kevin Holland. Although neither fighter was terribly hurt, there was some pushing and shoving going on backstage.

However, it was broken up by former MMA fighter and current manager Tiki Ghosn. But that is when Nate’s team walked in and they saw Ghosn with Chimaev. Unhappy with the whole scenario, Diaz’s camp and Chimaev’s team started throwing water bottles at each other. But, in the midst of all of that, Darren Till had a heated argument with Kevin Holland as well.

Seemingly disgruntled Till confronted Holland for getting involved with Khamzat in the first place. Fortunately, things were only limited to words and neither fighter tried to throw any strikes at the other. After almost 6 minutes of heated exchange, they were separated by security on site.

Kevin Holland will be fighting Daniel Rodriguez on the main card of UFC 279. Darren Till, on the other hand, will fight Dricus du Plessis at UFC 282 in December.

Darren Till reacts to his heated argument with Kevin Holland

Darren Till is present in Las Vegas as a part of Khamzat Chimaev‘s team. After things calmed down backstage, Oscar Willis of The MacLife, caught up with Till in his hotel room. After being asked about the whole fiasco, Till was not too bothered about it. He just stated that both Nate’s and Khamzat’s teams were trying to protect their respective fighters. There was nothing more to it.

As for his verbal altercation with Kevin Holland, Till stated that the issue was between Holland and The Borz and he had nothing to do with it.

“I seen Kevin and I was saying at Kevin, I was like, ‘None of us are gonna jump you’….he was like so I said just worry about your fight, don’t tell me what to do. I was like, ‘just do what you are doing then mate, don’t really give a f**k.'”

It does not look like the chat between Darren Till and Kevin Holland was malicious. As mentioned above, both of them have fights coming up. Depending on the result, they may find themselves matched up in the future.