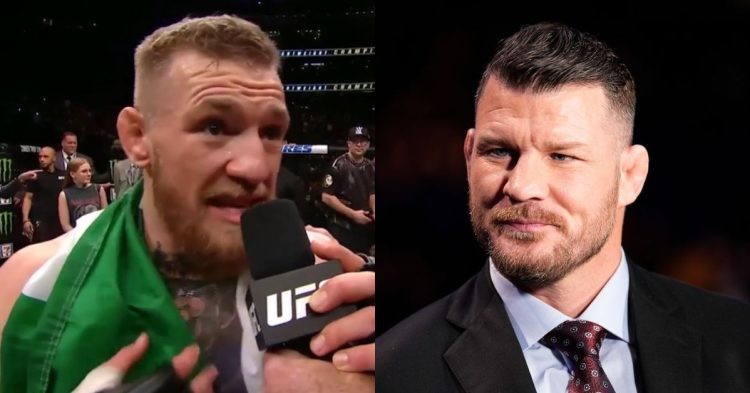 A few months ago Conor McGregor made a big splash on social media as he received his Hollywood break in Prime Video’s remake of the classic action flick Road House which will also feature megastar Jake Gyllenhaal.

After getting an opportunity to work in a Hollywood movie, The Notorious went on Twitter and insulted former UFC star Michael Bisping who had previously acted in a few movies. The Count didn’t take McGregor’s words kindly and offered his criticism.

Thereafter Bisping and Conor have publicly feuded for the past few weeks and it seemed like their beef would not come to an end. However, it seems that this back and forth will finally stop as Conor McGregor out of all people has decided to make peace.

McGregor posted a voice recording where he confessed that his comments about the British UFC commentator were all acting and that he didn’t think that Bisping would misinterpret his words.

“Hey, Mike it’s Conor here. Just getting about that video here, the last one I saw you didn’t understand. I was simply acting and I thought you would have known. Brother all love man God bless the show, God love the fam and God love my man.”

It is needless to say that Conor McGregor’s apology comes as a huge surprise as The Notorious has not taken his words back ever before. Moreover, he has turned back on his own famous quote “The double champ apologizes to absolutely nobody.”

Conor McGregor reveals that his comeback fight will be at 170

Conor McGregor is back in training after recovering from his nasty leg injury and he looks completely shredded. With that being said, everyone is eager to see The Irishman get back in action as soon as possible.

A few days ago, the former UFC champion went on Twitter and conducted a Q&A session for his fans where he responded to several questions. During this Q&A session, one of the fans asked McGregor whether he will compete in the welterweight division next.

The Irishman confirmed his return to 170 by saying “Definitely.” This opens up a lot of new options for Conor McGregor as he could face Tony Ferguson in his comeback fight who recently moved up to welterweight.

Apart from El Cucuy, Michael Chandler is ready to fight at 170 and that is another great option as both the fighters are very exciting. Do let us know in the comments section below who you think will Conor McGregor face in his best fight.