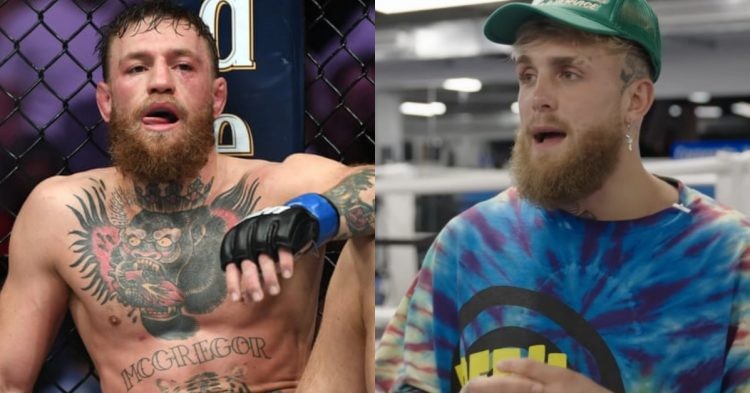 Jake Paul takes another dig at Conor McGregor during his podcast and says Draymond Green is a better striker than Conor! Recently the basketball superstar had a massive fallout with his Golden States Warriors teammate Jordan Poole and it had a very unfortunate outcome. Green knocked Poole unconscious with a massive sucker punch.

The way Poole just folded after getting hit by Green, certainly gives an idea of how powerful his right hand is. It made The Problem Child compare Green with Conor. During the latest episode of his BS w/ Jake podcast, Paul took a shot at the former UFC double champ and had some harsh comments about Conor’s latest sparring footage.

McGregor was the first fighter to hold two belts simultaneously in the UFC. He schooled Eddie Alvarez at UFC 205 to win the lightweight belt while he still had the featherweight strap. That was his last significant win as he has a record of 1 win and 3 losses in the Octagon since then. It includes the submission loss to Khabib Nurmagomedov and two stoppage losses to Dustin Poirier.

Conor McGregor is currently in the middle of filming a major Hollywood project. He will reportedly have a starring role in the upcoming remake of the 1980s cult classic, ‘Road House.’ It will also be his Hollywood debut and McGregor recently posted a picture of a bruise that he suffered during the process of shooting the movie.

Conor McGregor may have secretly retired from fighting

As fans have noticed, Conor McGregor is one of the biggest names in the entire sport of MMA and he has been missing from action for over a year now. There has been a lot of conflicting news regarding his future recently. While his manager ensured the fans that the 34-year-old will make his grand return in 2023, other reports imply that McGregor might be retired!

It is now public knowledge that the Dublin Native has not been tested by USADA in 2022. Fighters like Chris Weidman and Travis Browne who have not fought in a number of years or are injured have been tested multiple times this year.

It has led fans to believe that Conor may secretly have retired from fighting. The notion is substantiated by the fact that Conor has refused a $100 boxing rematch against Floyd.

Hence, it may answer Jake Paul’s question as to why Conor is not accepting any fights at present. However, Jake wants Draymond Green to pick his first fight in boxing. After the KO video went viral, Jake offered Green $10 million to fight any opponent of his choice. During his podcast, Jake reiterated the fact that his offer still stands.