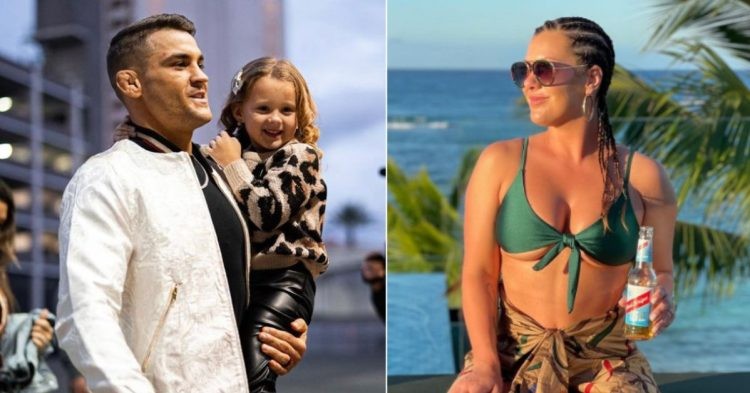 Dustin Poirier’s wife Jolie Poirier has stood tall despite all the mayhem that surrounded her and her husband during the heated rivalry between Dustin and Conor in the lead-up to UFC 264. Through it all, she has risen as Poirier’s support system, and rightfully so.

Ahead of quite possibly the biggest fight of Poirier’s career after his second failed attempt at clinching the lightweight gold, Jolie Poirier has sent an adorable message to her husband for his fight against Michael Chandler at UFC 281.

“Eeeeeekkkkkkk …. Less than 2 weeks until we get to see this man go to work in the GARDEN! SO EXCITED to see you in action! Shine on 💎” Jolie Poirier said in a post on the photo-sharing platform Instagram.

It has been a journey of ups and downs for Dustin Poirier, who has time and again found himself in the highest of highs and lowest of lows thought-out the course of his career.

Will Dustin Poirier fight for the UFC Lightweight Championship with a win over Michael Chandler at UFC 281?

Islam Makhachev, the current lightweight champion has already expressed his opinion on whether or not Dustin Poirier deserves a title shot with a win over Michael Chandler. The answer is straight simple, No, and rightfully so.

Poirier has already fought for the title twice in his tenured mixed martial arts career, having been submitted on both occasions. Moreover, a win over Michael Chandler does absolutely nothing for Poirier.

Chandler is coming off a win over Tony Ferguson, who is not even in the top 5 of the UFC’s lightweight division. On top of that, he has lost two of his last three fights inside the UFC Octagon.

It’s safe to say, should Poirier get past Michael Chandler at UFC 281, he will have to secure another win over a top-ranked contender if he wants to jump into the title picture. A rematch against Charles Oliveira, Justin Gaethje, or fresh blood in Beneil Dariush and Rafael Fiziev are all exciting options for the former interim lightweight champion.