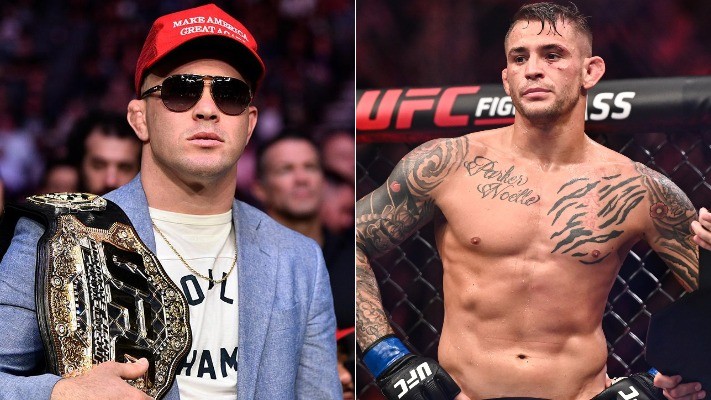 The beef between Colby Covington and Dustin Poirier is on the surface since he claimed that Poirier bullied an amateur fighter during sparring. Covington said: “he’s rubbing it in the kid’s face after he drops him. What’s nice and honorable, and charitable about that?” Well, now the “Chaos” is in the limelight again for putting statements out on fighting with Dustin.

Dustin and Colby were training bodies before Colby had to leave American Top Team a year ago due to numerous rifts with teammates.  Since then Colby and Dustin were not on good terms and the banter grew over time. The “Chaos” was asked during an interview on submission radio if would fight him.

“I think there is potential for that fight one day Dustin mentioned coming to 170 pounds before he has also said in many interviews it’s all on the sides when he sees Colby but, we all know that’s fake news“

Seems like Colby is up for the fight anytime. It is to be mentioned that he is the current front runner for the welterweight title bout against the champion Kamaru Usman. UFC President Dana White commented, “Colby Covington is next” when he was asked about the Nigerian Nightmare’s next opponent. On the other hand, Diamond is fighting Notorious in his trilogy bout. So, it is quite obvious that the beef will need some time till it turns into a fight.

Colby Covington claims Dustin Poirier is avoiding a fight with him

the fighter went on saying “He knows better than I know who his dad is.  And how many times have dragged and threw him across the octagon when we train together. So, I would love to give that fight to the fans but, if it doesn’t it will be because Dustin is scared and I will be just as happy as a victory. Because even one will know how much of a man I am and how much of a bitch he is”.

Covington claims that he has thrashed Diamond in the octagon when they were teammates. He also confessed that he would love to give this fight to his fans. But, it depends on Dustin, if he is ready or not.

Certainly, the former teammates are in a bitter relationship now. Nevertheless, if the bout schedules shortly, fight fans would be able to experience a hell of a fight for sure. As both the fighters are at the peak of their careers now.