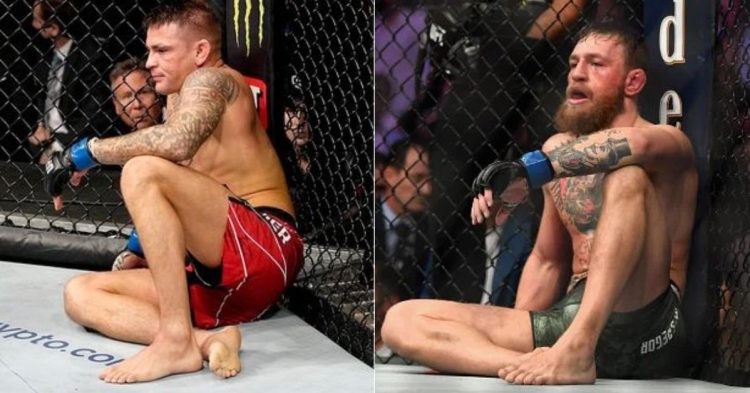 Dustin Poirier failed to grab the undisputed UFC gold after suffering a third-round submission loss against Charles Oliveira back at UFC 269. The bout marked the second successive defeat for Poirier in the Championship fight. Ahead of his UFC return almost a year later at UFC 281 this weekend, the former UFC interim lightweight champion admits he wasn’t his usual self mentally leading into the fight.

“This last fight with Charles, December last year, I kind of felt victim to that, I was looking at it like the whole camp, the whole process like an athletic venture. And it’s not, it’s war. It’s a war! I kind of went about the training camp that way, like a professional athlete.”

“It is that to a certain point, but at the end of the day, we are fighting each other. We are trying to physically hurt each other and stop each other.” Poirier said on The Daru Strong Podcast.

Poirier’s reaction in the aftermath of UFC 269 as he sat disappointed near the cage after getting choked out in the second round, much like Conor McGregor after his submission loss against Khabib Nurmagomedov back at UFC 229 says a lot of things.

One can draw parallels to Poirier’s approach against the Notorious in the leadup to UFC 264 where despite some brash trash talk by McGregor, Poirier maintained it was “just business”.

Is Conor McGregor to blame for Dustin Poirier’s loss against Charles Oliveira at UFC 269?

Dustin Poirier was part of two of the biggest UFC PPVs of all time when he fought Conor McGregor at UFC 257 and UFC 264. Both the bouts fetches in the excess of 1 million PPV buys, and it’s safe to say it turned out to be the biggest fight purse of Poirier’s career.

A case can be made that fighting against Conor McGregor changed Poirier’s mindset towards fighting and just like McGregor, he also started looking at it as a business “venture.”

However, for Poirier, MMA has always been about the “kill or to be killed” mentality and the former interim lightweight champion is confident he is bringing the same old mentality back inside the Octagon come UFC 281.

As Poirier steps inside the cage on November 12 against Michael Chandler at MSG, he once again stands at the cusp of a title opportunity should he emerge victorious. However, it will be easier said than done.