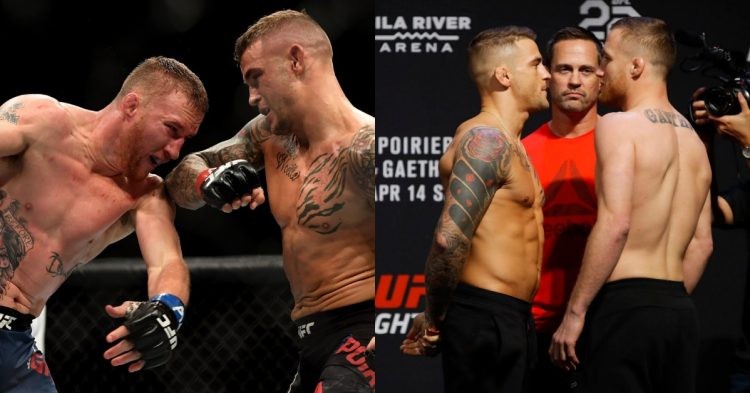 It seems like Dustin Poirier has finally got his wish! According to MMA UNCENSORED, Poirier is currently in talks to fight Justin Gaethje on August 20th at UFC 278.

They previously butted heads in 2018 on a FOX main event. Unsurprisingly, the bout was awarded ‘Fight of the Night.’ Both Poirier and Gaethje went to war for 4 rounds. There were multiple swerves throughout the night as it seemed both of them were on the cusp of finishing the other fighter.

However, it was ultimately Dustin Poirier who got his hand raised as he stopped Justin in the 4th round. Since that fight, both have gone on to enjoy and very successful run in the UFC. Both have held the UFC Lightweight Interim Championship and have fought for the undisputed title twice. Coincidentally both of their last losses came against Khabib Nurmagomedov and Charles Oliveira.

Can Justin Gaethje avenge his loss to Dustin Poirier in the rematch?

Justin Gaethje lost to Oliveira at last month’s UFC 274. Dustin Poirier is also coming off a loss to the Brazilian at UFC 269. While Gaethje is 3rd ranked in the division, The Diamond is above him at 2nd. Hence, matching them up is the most sensible option for the UFC. Both of them are fan favourites and if their last fight was any indication, the fans are in for a massive treat come August.

However, the result of the fight may very well have a make or break effect on both of their careers. Both Dustin and Justin have already had multiple cracks at the belt. Hence a loss in this fight will push them even further from the title picture. But Dustin will have the upper hand going into the fight.

Gaethje used to be the most reckless fighter in the UFC. If he had shown some constraint during their first fight, the result certainly would have been much different. Although Justin reigned in his violent tendencies afterwards, he once again fought carelessly against Charles Oliveira last month.

If he repeats the same against Dustin Poirier, the result will definitely be the same as their previous encounter. Neither fighter will especially shoot for a takedown as both of them are elite strikers. Hence this rematch has fireworks written all over it. Dustin is more compact in his approach than Gaethje. But the latter has the power to make the difference.

Who do you think wins the fight? Can Justin turn the table on Poirier? Or Dustin will once again be triumphant over Gaethje? Let us know your thoughts in the comments down below.