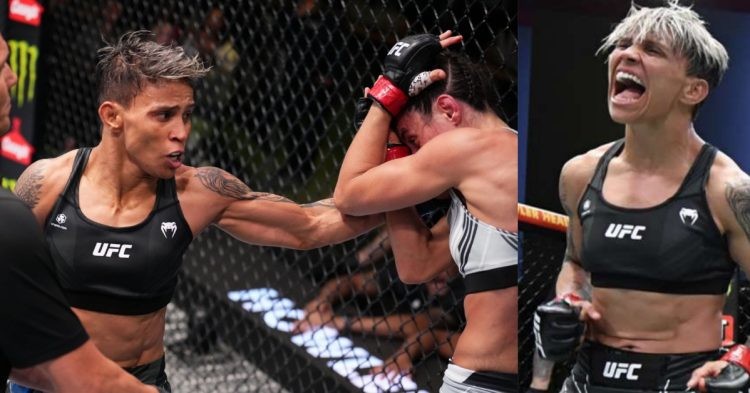 With a potential title opportunity at stake, 3rd-ranked Marina Rodriguez fought 7th-ranked strawweight fighter Amanda Lemos in the main event of UFC Vegas 64. Both fighters had a lot of confidence heading into the fight. But, who was able to come out on top in a clash between two Brazilian warriors? Let’s find out!

Marina Rodriguez took the backseat early in the fight. But that allowed Amanda Lemos the chance to be the aggressor and land some good kicks. Marina replied back with some kicks of her own. But neither fighter took the initiative to throw punches until the last few seconds of the round. It was Marina who finished the round strongly as Lemos ended round 1 on her back.

Lemos was sharper at the beginning of the second round. She found some success with body kicks and landed a decent punch as Marina was rushing in. Amanda got her revenge in round 2 as she managed to send Rodriguez tumbling down to the ground and almost managed to sneak in a rear-naked choke. But Marina was aware of her position and managed to transition out of it. However, Amanda finished the round on top.

It was clear that Amanda had intentions to finish in the contest. Hence, she started round 3 with extra vigour. It ultimately worked out as she landed a big punch which rocked Marina. Sensing the opportunity of a stoppage win, Lemos rushed in and got rid of the fellow Brazilian fighter.

Amanda Lemos displayed beautiful striking and amazing grappling. She stopped the third-ranked fighter in the division in a dominant fashion. She has shown clear signs of improvement since her standing arm triangle loss to Jessica Andrade in the same arena. As a result of the opponent she beat, the 35-year-old may become the next contender to face the winner of Carla Esparza vs Weili Zhang at UFC 281.

Amanda Lemos gets the job done with a BARRAGE! #UFCVegas64 pic.twitter.com/MPFtpE68MS

However, Amanda Lemos is not ready to wait around. After her impressive victory, Lemos made an interesting request to UFC President Dana White. She added, “Hey Dana, I’m here already. Put me as a backup for the title fight in New York (UFC 281).

There is a big chance that UFC may grant Amanda Lemos her wish. The company has a history of having replacement fighters ready, in case one of the main event fighters can not make the walk to the Octagon. Amanda is on a 2-fight winning streak and is guaranteed to find a place in the Top-5. So it does make a lot of sense.

However, a portion of the fans is questioning the ref’s decision to stop the fight. Marina was still on her feet while the referee stopped the bout. Hence, fans are not sure about the decision to waive the bout.

Here are some fan reactions to the stoppage

That must be such a rush to win by KNOckout. She reminds me of Jessica Andrade, when she gets her opponent hurt they quickly become prey.

Anyone think it was an early stoppage?

Early stoppage gotta let that go in the main event. Good for Lemos tho

Early stoppage. She was defending and didn’t go down

What did you make of Amanda Lemos’ win against Marina Rodriguez? Let us know in the comments down below.