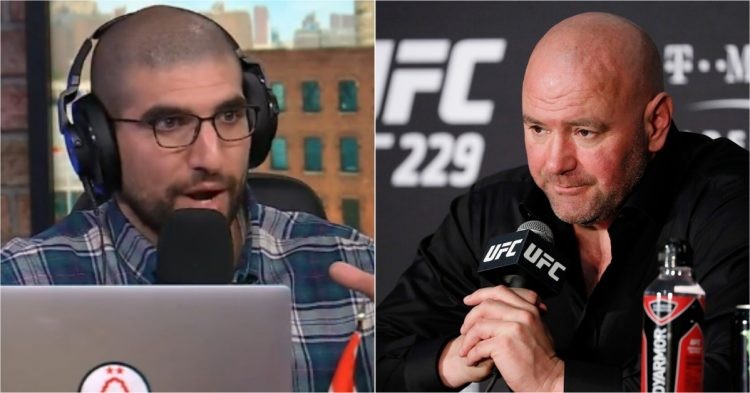 The UFC world was rocked by controversy after Dana White was found slapping his wife. Recently videos surfaced where Dana and his wife Anne White had a fight. While they were in the middle of a family vacation, the two ended up having a physical altercation. The video went viral instantaneously and it unleashed a major controversy.

Former ESPN journalist and current MMA Hour host Ariel Helwani has decided to take a strong step against Dana. It is well documented that the UFC President and Helwani do not get along with each other. Their relationship was already rocky heading into UFC 199. But, Helwani breaking the news of Brock Lesnar’s return, pushed things over the edge.

Since then Dana has targeted Ariel countless amount of times. Recently, Dana and Paddy Pimblett took some nasty shots at the Canadian journalist. Hence, it was Ariel’s opportunity to get back at Dana. Although he lauded Dana for owning up to his mistakes, Helwani did not mince his words in condemning White’s actions. He referenced the infamous video with Paddy and Dana to slam the latter on his actions.

PT 2:
To hear someone like that speak about me the way in which he speaks about me. Do you know how fucking crazy that is?#TheMMAHour pic.twitter.com/2kiHoEhBe7

Ariel Helwani did not stop there, he also slammed major publications like ESPN for not covering the story. According to Helwani, he was censored many times while he was working for the company. He also stated his disappointment that all big publications were shying away from covering Dana White’s actions.

Is ESPN shying away from addressing the allegations against Dana White?

ESPN pundit Stephen A. Smith spoke about the incident during a broadcast. He called Dana White a friend and also spoke about the guilt that the 53-year-old had felt after the incident. Both Dana and his wife Anne issued separate statements on the matter to TMZ after the video went viral. During his statement, White revealed that he was intoxicated.

His wife also validated his statements and revealed that the couple never had a violent altercation such as this previously. Stephen A. also referred to that during his comments on the matter.

Clarification: There was no edict from ESPN bosses regarding the White situation, but in general we are strongly discouraged from incendiary posts on social media, and with a business partner things are sensitive. My bad on the wording. (The thought that follows still stands.) https://t.co/KC0Fk5DTz2

Although he was quite sympathetic, ESPN writer Jeff Wagenheim spoke out against the issue and revealed that the company “discouraged” staff from making any posts on the matter. ESPN is UFC’s official broadcasting partner. Aside from airing the Fight Night events, ESPN also is UFC’s PPV distributor. The multi-billion dollar deal also includes the rights of “The Ultimate Fighter.”

Hence, the fans appreciated Ariel Helwani even more after the shocking claims by Jeff. Some fans on Twitter called out other ESPN journalists while praising Helwani’s coverage on the matter.

Sad to see ESPN and the rest of the MMA media lose their integrity. S/o to Ariel Helwani for calling Dana out. Sad days ahead for the UFC

Dana is a mafia boss. He has everyone by the balls. It’s honestly impressive how much power that dude has. He owns ESPN right now

ESPN journalists and employees should be ashamed for not speaking out. Cowardice

And the MMA journalists, too. Go Helwani 👍🏼 https://t.co/eTI6qELwVf

Helwani is not a minion of Dana

History will show that Helwani KO’d Dana, Paddy, and Brendan Schaub all in a single year

What is your opinion about the whole matter? Do you think big organizations are intentionally avoiding the news? Let us know in the comments down below.