Everyone Forgets Demetrious Johnson: Israel Adesanya Puts an End to the GOAT Debate 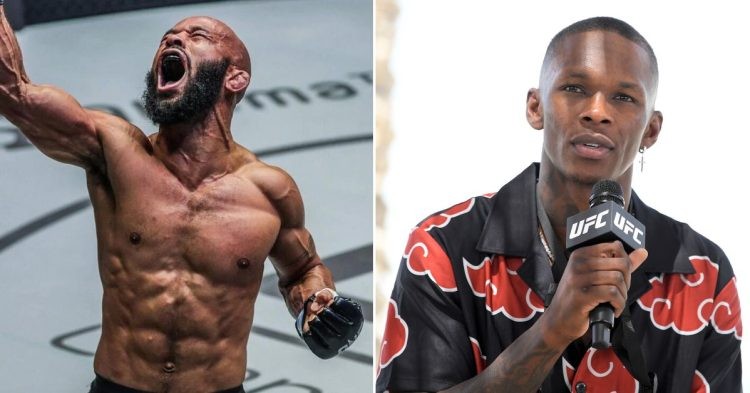 After Khabib Nurmagomedov’s retirement, the MMA world has been buzzing around the GOAT debate. Khabib has already claimed that with a perfect record of 29-0 he is the P4P number 1 fighter. Jon Jones has claimed that the GOAt spot is rightfully his. The UFC middleweight champion, Israel Adesanya, however, has a different opinion on the discussion.

It’s not a secret anymore that Israel Adesanya does not consider Jones the greatest of all time. He believes that Jones has many blemishes on his records, which does not help him earn the GOAT spot.

Besides that, Israel Adesanya does not entertain the GOAT debate often. And when he was asked to give his verdict in a recent interview with Submission Radio, Adesanya put an end to the GOAT debate by bringing up the fact that the fans are not even mentioning one of the greatest to ever do it in the discussion. Adesanya stated:

“Everyone just wants to forget about Demetrious “Mighty Mouse” Johnson. If you want to talk about who was the most consistent and records fighter of all time, weight classes just the perfect fighter, never had the one blemish outside the octagon with steroids or anything like that. Never had any real problems inside the octagon. A few losses here against Dominick Cruz, Henry Cejudo, and blah blah blah. If you don’t talk about GOAT, a guy who is just a phenomenal fighter someone who I would watch and just be like how his brain processing all that at the same time. His suplex to armbar, just stop all the GOAt talk and jibber-jabber.”

Can Israel Adesanya be the P4P number 1?

The GOAT debate is a never-ending trend in MMA. Even though we can not conclude that someone is the greatest fighter ever we can still recognize the once in a lifetime superstar that we often see.

And Israel Adesanya is certainly one of them. Khabib Nurmagomedov deserves to be the number one P4P fighter right now because of his achievements in recent times. However, his resume does not look as impressive when compared to Jon Jones’ or GSP’s.

But, if he comes back and secures a victory over Georges St-Pierre in a dream match then the majority of the fans might lean towards crowning Khabib Nurmagomedov as the Greatest fighter of all time.

And if Israel Adesanya can move up to light heavyweight or heavyweight to capture his second UFC title then how can he not be considered the GOAT? He is the only unbeaten champion in UFC after Khabib Nurmagomedov. And his achievements in UFC will surpass the greatness of the Russian champion if he can become a two-division champion.