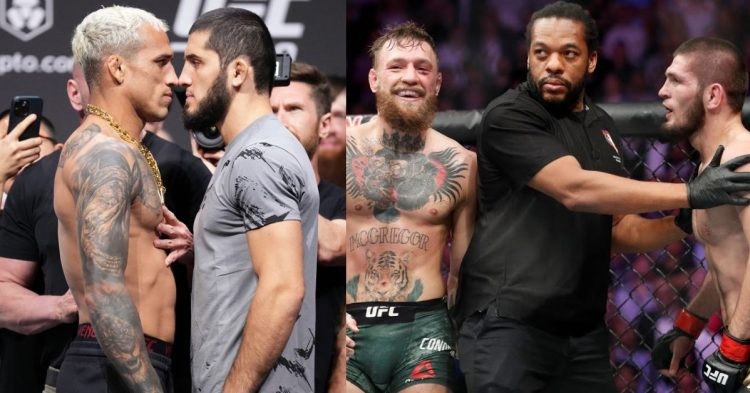 Islam Makhachev is the new lightweight champion after submitting Charles Oliveira in the main event of UFC 280. This was one of the most anticipated matches that got everyone excited.

Ahead of the fight, Oliveira (11) and Makhachev (10) built their undefeated win streak after clearing the division and then collided with each other. However, the build-up to this fight saw a lot of drama and trash talks from both the fighters’ camps.

The former lightweight champ and mentor of Makhachev, Khabib Nurmagomedov made some bold claims that upset Oliveira and his fans. Due to Khabib’s comments on Oliveira, many fight fans stated that ‘The Eagle’ has turned into Conor McGregor, who trash talks about everyone on social media.

But after Makhachev became the champion, Nurmagomedov, Makhachev, and Oliveira were seen together in a conversation with each other. When asked about what Khabib told him in the post-fight pressure, Oliveira said:

“This is a sport that we know what it’s all about, and we actually have to promote fights and this is what we do…”

‘Do Bronx’ revealed that Khabib adopted McGregor’s strategy to promote the fight but he respects Oliveira as a fighter. Oliveira further added:

“He came up to me and just basically said that everything was just promoting the fight that he had respect for me and he is a great champion. He has an amazing journey in the sport and now he has a great champion next to him.”

McGregor is a master of trash talk and uses his mic ability and mental warfare to sell a fight and get under his opponent’s skin. But it backfired against ‘The Notorious’ when he tried that with Nurmagomedov.

Charles Oliveira was dominated by Makhachev at UFC 280, both on feet and ground. A lot of people had a long debate over this ahead of the fight. Surprisingly, Makhachev’s powerful strikes followed up with his Dagestani wrestling stunned Oliveira who was supposedly the superior striker.

Oliveira’s elite submission skill is the reason why no opponent in his past fights wanted to play the ground game with him. But being a master grappler and the protégé of Nurmagomedov, Makhachev wasted no time, went straight to Oliveira’s guard, and dominated him for the rest of the rounds.

After this upsetting defeat, Oliveira showed great humility and accepted that Makhachev was the better fighter that night. Speaking to the media, Oliveira opened up about this loss and said:

“We are a family, man; we win together, we lose together, and we are always going to be together.”

Makhachev’s wrestling turned out to be better than Oliveira’s jiu-jitsu and before this fight, Islam and his team were very confident. Ironically, Makhachev submitted the greatest submission artist in the UFC.

“The only thing, I apologize for not winning tonight, but certainly they are going to be around me, so it (the belt) can come back,” Oliveira concluded.

Watch the whole clip below:

Despite this loss, Oliveira showed an act of great courage when he accepted this fight against a dominant lightweight, which took place in Abu Dhabi,  a place known as the home turf for fighters like Nurmagomedov and Makhachev. Hopefully, Oliveira will come back stronger and get a second chance to reclaim the title.

Islam Makhachev Is Going to Fight Khamzat Chimaev at Welterweight After His Brawl With Abubakar Nurmagomedov?