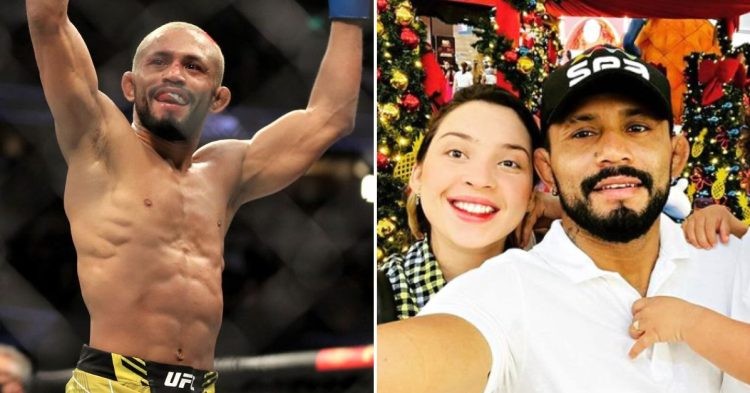 Deiveson Figueiredo reigns as the current UFC’s flyweight champion of the world. The Brazilian fighter has quickly risen to the top of the flyweight division. In just over four years, Figueiredo has amassed a spectacular record of 8 wins and just one loss inside the UFC Octagon to take his MMA record to an incredible 19-1. The Brazilian fighter is married to his long-time girlfriend Bruna Moraes and the couple has one child together.

The rise of the Deiveson “Deus Da Guerra” Figueiredo

Figueiredo made his UFC debut coming off an incredible 11 fight win-streak and picked up his very first stoppage win over Marco Beltran back in June of 2017. After a fairly on sided fight, the bout came to an end after Beltran’s corner called a stoppage to the fight at the end of the second round.

Figueiredo continued his impeccable run with back to back wins over Jarred Brooks, Joseph Morales, and John Moraga. However, Daico suffered the first loss of his MMA career against top-prospect Jussier Formiga. However, he came back strong after a unanimous decision loss to the veteran fighter with an impressive “Fight of the Night” outing against Alexandre Pantoja.

The Brazilian fighter carried the same run as he picked up a quick submission win over MMA veteran Tim Elliot in the very first round to earn his first title opportunity against arguably the greatest of all time Joseph Benavidez.

The God of War, while, very dangerous inside the Octagon is actually a very humble person outside of it. He is married to his long-time girlfriend Bruna Moraes. The couple tied the knots in a lavish ceremony. Figueiredo is a very private person and the wedding was attended by his close friends and family members.

Figueiredo is a lovely father and never shies away from expressing his love to his son Benicio. The couple welcomed their first kid in March of 2019. The flyweight champion likes to keep his private life to himself, and very rarely does he share photographs with his wife Bruna Moraes.

Deiveson Figueiredo missed weight in his first title opportunity against former three-time title challenger Joseph Benavidez back in February of 2019. While the title was only on the line for Benavidez, Figueiredo picked up a stoppage win over the “Beefmaster” to cement his name in the division. However, a headbutt in the early minutes of the second round drew criticism from Benavidez’s fans who claimed that the result could have gone his way if not for the accident.

In light of Figueiredo’s win and the potential headbutt that may have resulted in the loss, a rematch was set. Both the fighters once again shared the Octagon back in July of this year. To everybody’s surprise, it was a one-sided fight with Figueiredo emerging victorious. In the process, he became the UFC’s flyweight champion.