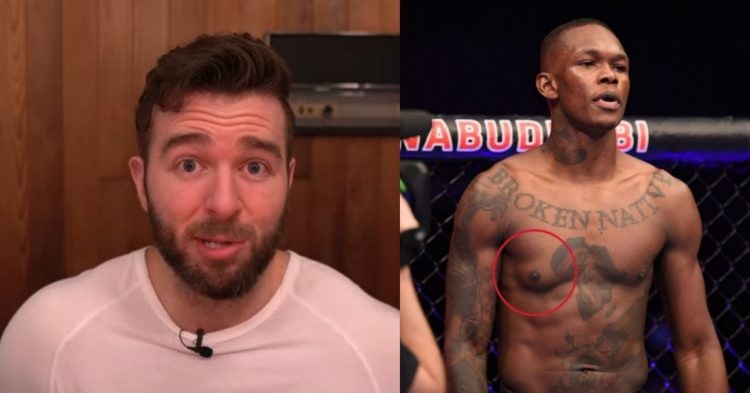 Israel Adesanya recently completed his 50th successful USADA drug test. Ahead of his fight against Jared Cannonier at UFC 276, he was presented with a USADA jacket as a reward for his clean drug tests. But Israel took it one step further and offered a reward of $3 million to anyone who could prove the allegation of him being on steroids.

It seems like someone has finally decided to take up that challenge. A popular YouTuber by the name of Derek from the channel ‘More Plates, More Dates,’ has explained a possible reason as to why Adesanya may be guilty of using steroids.

Firstly, he spoke about Adesanya’s demeanour and why he thinks Israel is lying. Derek brought up how confident Adesanya was while speaking about Jon Jones’ failed drug test.

But on the other hand, Stylebender acted as if he had no idea about drugs when the finger was pointed at him. Although that itself does not prove Adesanya’s guilt, the YouTuber then went on to give his best guess as to how Adesanya may have cheated.

Was Israel Adesanya really on steroids?

Although Derek does not contain a medical degree in the matter, he has years of experience in pharmacology and endocrinology. He also appeared on the Joe Rogan Experience in December of 2021. The YouTuber expertly broke down what was causing Jon Jones’ pulsing in drug tests.

Now, on his own YouTube channel, he came up with a possible theory as to why Adesanya may have encountered gynecomastia and how steroids may be a possible cause.

The problem first with Israel Adesanya’s right chest appeared right after the covid-19 lockdown in early 2020. According to Derek, if there was any sense of foul, it must have taken place during the lockdown when the testing was not done properly.

Israel Adesanya lives in New Zealand and they had the strictest lockdown protocols out of any country in the world. Hence, drug testing for USADA was not possible to conduct in a timely manner. Even if Adesanya had taken drugs, how did it impact his gynecomastia? Derek explained,

“To me, this looks like a scenario where by he used something, when it was less scrutinous testing, pulled it out, probably ended up in a state of androgen deficiency relative to the estrogenic burden and or the stimulatory imput from may GH used to with the heightened estrogen relative to the androgen status, whatever it is,”

“At the end of the day when you go hypogonadal, you end up in a state of very very very likely to develop gynecomastia.”

However, Derek did not sound confident about getting the $3 million reward from Israel Adesanya. He clarified that his explanation is just a theory and Adesanya has not presented enough evidence for him to come up with any verdict.

Regardless of any controversy, the fans are excited to see Adesanya back in action. He will defend his middleweight title for the 5th time against Jared Cannonier at UFC 276. It goes down this Saturday, July 2nd.