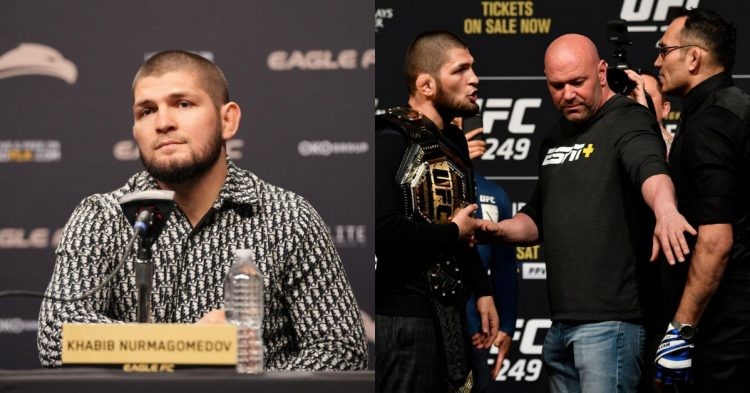 UFC 249 will go down in UFC history as one of the most important events. It was the first sporting event during the COVID-19 pandemic. It was originally scheduled to go down in April of 2020. It was set to feature Khabib Nurmagomedov vs Tony Ferguson in the main event for the UFC lightweight championship. Unfortunately for the fans, everything had to be shut down because of the global pandemic.

The rescheduled event ultimately took place on 10th May 2020. Although Tony Ferguson remained on the card, Khabib Nurmagomedov could not make it to the United States of America as the borders were shut down. Justin Gaethje replaced him and it marked the downfall of Tony as he lost all of his last 5 fights. Khabib, on the other hand, retired after beating Gaethje at UFC 254 later that year.

However, as a fan recently pointed out, Khabib allegedly could have made it to the USA in time for UFC 249, if he wanted to do so. WOSSO NEWS on Twitter reports that Khabib apparently ducked Tony, as there were flights available at the time for him to reach America. It cites a journalist by the name of A. Lutikov, who pointed out the availability of flights for Nurmagomedov.

3. Khabib’s cousin who’s name remains unknown.
Back in 2020, when Khabib pulled out of Ferguson fight because “there was no way to get to US, because of pandemic”, a journalist A.Lutikov made an IG post implying that Khabib doesn’t really want to fight so he’s making up excuses. pic.twitter.com/TSAyybFxCZ

Despite the report, there is no verification if the content of the report was factually accurate or not. Hence, the fans can take this with a grain of salt. Even if Khabib made it to the country in April, the promotion cancelled the fight anyway. So it would not have mattered in the end.

Fans will forever regret not seeing Tony Ferguson taking on Khabib Nurmagomedov in their respective primes. It was a dream fight for the fans over a period of 5 years. Although UFC tried to match them up multiple times, something or the other always came up to ruin the plan.

The last opportunity was at UFC 249 and the pandemic ultimately took away that as well. But just when it seemed like Tony Ferguson and Khabib will never share an Octagon together, an outside possibility presented itself. Earlier this year, Khabib floated the idea of a season of The Ultimate Fighter (TUF) with him and Tony as the coaches.

After a lot of initial hype about the project, the talks have somewhat died down recently. While The Eagle is busy building his own promotion, Tony is coming off a submission loss against Nate Diaz at UFC 279. So it remains to be seen if they ever cross paths or not. But, if the recent events are any indication, the ship has sailed on Tony vs Khabib.