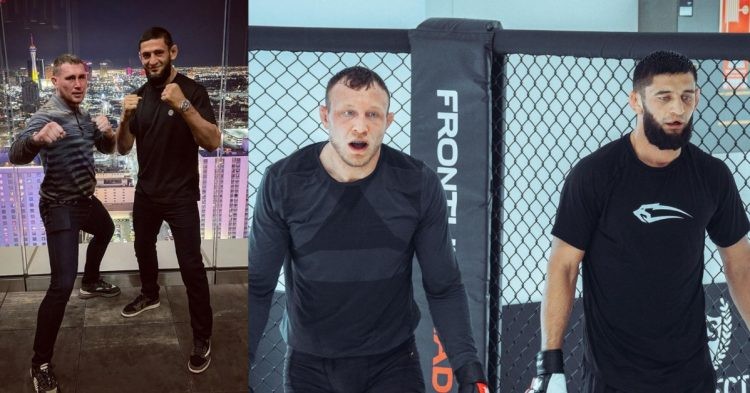 Khamzat Chimaev and Darren Till have become one of the most talked-about power couples in the UFC. Together, they have come to be known as the ‘Smesh Brothers.’

But is the duo about to break up? A recent post on Khamzat’s Instagram has riled up the fans as they speculate about what is going on behind the scenes.

Darren Till allied himself with The Borz in late 2021. From training together in Sweden to goofing around during the UFC 273 fight week, Chimaev and Till had become inseparable. Khamzat Chimaev sitting on top of the Octagon with Darren Till by his side has now become an iconic picture.

But Chimaev recently posted with Jack Hermansson on his Instagram account. Although it is just a picture, it becomes much more significant when put into context.

Khamzat’s best friend Darren Till is set to fight Jack in the upcoming UFC London card in July. Hence, Chimaev posting a picture with Hermansson, training together, makes the fans wonder if Chimaev betrayed him or not.

While some fans online think that Khamzat is being unfaithful to Till, others think Chimaev wants to train with Jack become of his superior grappling skills. Here are some of the reactions from the fans.

Khamzat cheating on his mistress Darren

The guy with the smesh bros tattoo is crying right now

Because Khamzat wants to get real ground work in

Why was Jack Hermansson in the same gym as Khamzat Chimaev?

Although Khamzat Chimaev was born in Chechnya, he moved to Sweden for a better life and joined Allstars Gym in Stockholm. Coincidentally, Jack Hermansson is a native Swedish fighter as well. Being among some of the best of their respective divisions, Jack and Khamzat developed a great friendship over the years.

But The Joker is not a part of Chimaev’s gym. He started his professional MMA career with Team Hellboy. Later, Hermansson moved to Frontline Academy. But the country does not have as many elite training facilities for fighters.

Hence, it is common for members of different gyms to go to other gyms for training sessions. Hence, there is nothing scandalous with Jack and Chimaev being seen together.

After his UFC debut in 2021, The 28-year-old had a monstrous hype behind him. A massive contributing factor to that was a freestyle wrestling match between Khamzat and Jack. In November of all year, they had a live wrestling match which saw Khamzat rag-dolling Jack and winning the contest comfortably.

It made the fans wonder about how good Chimaev has to be to dominate a very good grappler who fights up a weight class. Following the bout, Both Chimaev and Hermansson were seen laughing and hugging each other.

Darren Till himself is currently in the training camp with his own gym. On the other hand, Chimaev is also holding a fight camp for an undisclosed bout. He was rumoured to be facing Belal Muhammad. Hence, the fans may not see Khamzat at Till’s corner. But there is no indication that things are not pleasant between them.