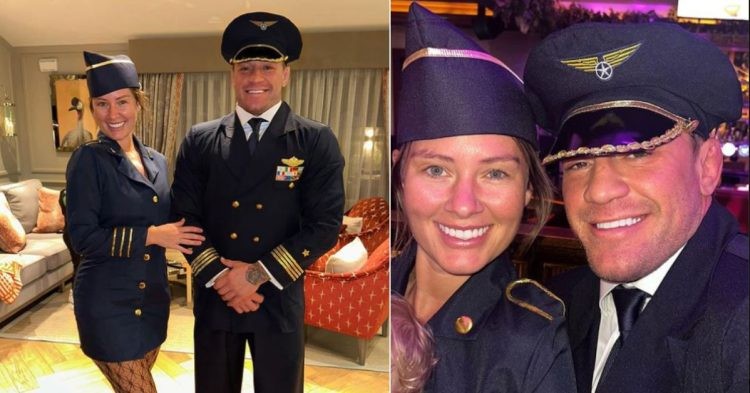 Conor McGregor is aging! Steroids use is making McGregor age quickly! All that whiskey is making him age! – And multiple other opinions bombarded McGregor’s social media feed when McGregor donned a beard and addressed his 40M+ social media fans. However, a recent photo from The Notorious seems to have changed the narrative.

I guess but bro don’t even look like Conor anymore

Dropping the beard, McGregor had the MMA fans in frenzy. On the occasion of Halloween, McGregor surprised fight fans with the “Pilot” look on his social media platforms, and the Notorious is looking “young”, fans captioned!

That’s not Conor, it’s not him, without the beard he’s just a stranger

Where’s all the ppl saying he looks 40 now? Literally only cause he’d a beard

Maybe it had all to do with the beard, some users commented. Others pointed out how the former two-division champion looks a lot younger without the beard.

While some celebrated the return of the “mythical fighter, beardless Conor”, others went on to say he looked “like another person”. Check out the photos right here and do let us know what you think in the comments section.

When will Conor McGregor return?

Conor McGregor has not stepped inside the Octagon ever since the horrific leg break he suffered in the trilogy fight against Dustin Poirier back at UFC 264 in July 2021. McGregor has since been under-recovery and is currently busy shooting for his Hollywood debut in the movie Road House starring Jake Gyllenhaal.

McGregor is aiming to return to the Octagon in early 2023. However, reports of McGregor not being in the USADA testing pool raise a lot of eyebrows. Fans have cited concerns over McGregor using steroids ahead of his UFC comeback, with Joe Rogan opining how McGregor could be on the juice after watching his “heavyweight” physique.

McGregor recently revealed he currently weighs around 265lbs, which is 5lbs over UFC’s heavyweight limit. While the Notorious has seemingly confirmed his return to the UFC’s welterweight division, it remains to be seen what lies ahead for the former two-division champion.

As far as his return fight goes, there are several options for the Notorious. Michael Chandler has expressed his desire to face the former lightweight champion after his fight with Dustin Poirier at UFC 281. Charles Oliveira had earlier expressed his interest in facing the Notorious as well.

There’s no lack of big names who will be willing to step inside the cage against Conor McGregor. However, it will all boil down to the Notorious whenever he makes his UFC return.