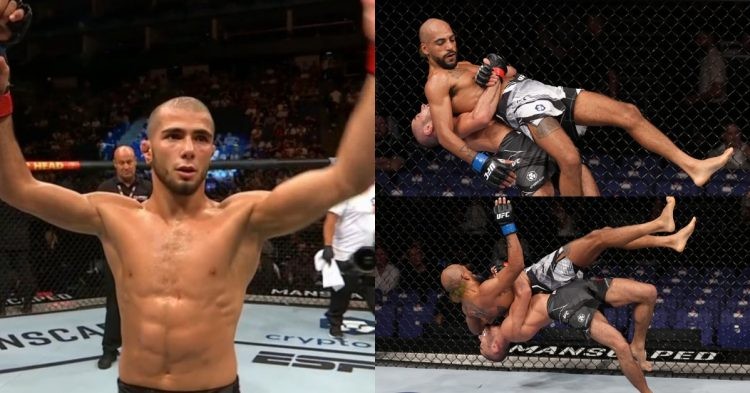 Exciting flyweight talent Muhammad Mokaev just had his second bout in the UFC. Mokaev took on Charles Johnson in the preliminary card of UFC London. The undefeated prospect was coming off a very impressive submission win over Cody Durden.

Mokaev went up against Johnson who was an extremely well-rounded fighter with 11 wins. He was also the LFA Flyweight Champion before coming into the UFC. Hence, the bout was not easy for Mokaev. This contest was the perfect parameter to judge whether Mokaev was ready to take the next step in his career or not.

Bad blood boils over in our next bout 💢@MuhammadMokaev welcomes newcomer @InnerGMMA to the Octagon RIGHT NOW!

But it was an important contest for Charles as well because it was his debut fight in the UFC. Beating an unbeaten youngster such as ‘The Punisher’ would have given Johnson a headstart in his journey in the UFC. With so much at stake, who got the win? Let’s find out.

Muhammed Mokaev immediately backed Charles Johnson into a corner. Johnson seemed uninterested in exchanging and started to move away as soon as Mokaev started to take any initiative. However, Mokaev was able to tangle Johnson up as the minutes went on. Although the Manchester native took Johnson down a few times, he was not able to control Charles on the ground.

At one point, Mokaev almost snuck in a rear-naked choke. But Johnson was able to escape it. Although Johnson managed to survive the round, he was unable to put up any meaningful offence. Round 2 started in a very similar fashion as round 1. Johnson was on the back foot early on and was eventually taken down by Mokaev.

THIS SUPLEX FROM MUHAMMAD MOKAEV 🔥pic.twitter.com/jKgh4SXRhT

But Johnson’s wrestling skills were on full display as he seemed to have no problems in getting up. However, Mokaev was eventually able to figure out Charles’ wrestling tricks and put him on his back for the first time in round two. However, Muhammad did have some trouble finding a way around Johnson’s defence and landing any damaging strikes.

Johnson’s coach urged him to take more initiative in round 3 and control the cage. The former LFA champ tried to execute the plan in the opening seconds of the fight. However, Mokaev caught a kick from Johnson and it allowed him to control the fight along the fences very well. Although Johnson did not make the fight easy for Mokaev, the American fighter was dominated in every aspect of the fight.

Behind a 3 round flyweight record 12 takedowns, @MuhammadMokaev is leaving #UFCLondon with his perfect record intact 👏 pic.twitter.com/Xea11Y6tS2

There was a lot of excitement from the crowd about seeing an exciting finish from one of their own. But the bout went the full distance and Mokaev won the fight via unanimous decision. All three judges had it 30-27 for the unbeaten fighter.

Following the bout, fans seemed very excited about Muhammad Mokaev and his grappling abilities. Although he did not get a finish, this bout proves that he can rely on his cardio and wrestling to dominate any opponent in the division. He landed 12 takedowns and was relentless with his pace. If he can keep this up, then Mokaev will be a problem for sure.

Some fans even compared his suplexes to Brock Lesnar’s!

Official scorecards: Muhammad Mokaev def. Charles Johnson (3x 30-27). He breaks the flyweight record for most takedowns (11) in a 15 minute contest. The 21 year old moves to 8-0 with another dominant performance for Britains most exciting young prospect 🔥#UFCLondon pic.twitter.com/6VZJLIUYvg

Muhammad Mokaev going to drop a little steam off this win, which might be for the best, honestly.

21-year-old is going to be something special if he’s given proper development. #UFCLondon https://t.co/grGmC3UJUa

Back to back dominant wins start to Muhammad Mokaev’s UFC career. pic.twitter.com/NRNBeZwQlb