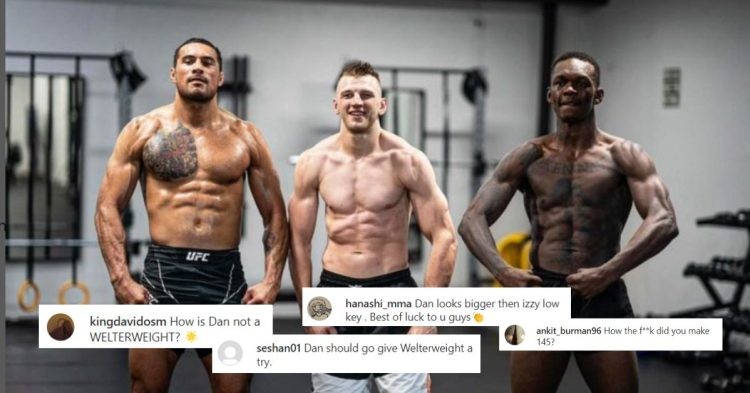 Fans are in disbelief after Dan Hooker looks “bigger than Izzy” in a recent photo posted by Hangman on the photo-sharing platform Instagram. Hooker is preparing for his return to the lightweight division where he takes on Claudio Puelles on the main card of UFC 281 on November 12 inside Madison Square Garden, New York.

In the photo, Hooker can be seen alongside his City Kickboxing teammates Israel Adesanya and Carlos Ulberg. It won’t be wrong to say that Hooker looks quite huge ahead of his lightweight return. “Dan looks bigger then izzy low key,” a fan noted. “How the f**k did you make 145,” another opined.

Another fan even went on to say Dan Hooker should try his luck in the welterweight division. Comments such as, “Hope he fights at welterweight,” “Can’t believe you make 45,” and “Yo Dan Hooker is literally almost as big as Izzy” bombarded the comments section as fans expressed their disbelief at Hooker’s incredible physique ahead of UFC 281.

Hooker will return to the lightweight division after a failed attempt at the 145-pound division against Arnold Allen in his last outing.

Hooker suffered a first-round stoppage loss against Allen, in what marked his second straight loss. Hangman is now 1-4 in his last five fights. Needless to say, he will look to jump back to the winning column next weekend and looking at his recent photo, the lightweight contender looks to be in the best shape of his life.

It will be easier said than done against the 26-year-old Claudio Puelles, who is riding on a five-fight win streak. Puelles’ last performance was a Performance of the Night outing against MMA veteran Clay Guida, a fight he won via submission in the very first round.

Dan Hooker has explained his recent lackluster run as “ego death” and is confident about jumping back to the winning column at UFC 281. The much anticipated PPV will feature Israel Adesanya taking on his archrival Alex Pereira in a five-round headliner inside MSG.