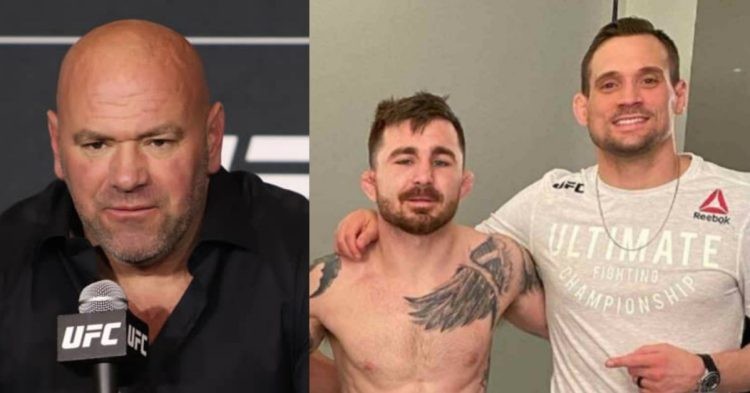 One of the main card fights from UFC Vegas 64 is under investigation for betting-related issues. Shayilan Nuerdanbieke beat Darrick Minner in the first round via TKO. Minner threw a kick right at the beginning of the first round. But it had the exact opposite effect as it was Minner who got hurt. It seemed the kick hurt Darrick’s knee.

Instead of moving away from throwing another kick, Minner attempted to kick Shayilan with the same leg just moments later. The second kick was too much for Darrick’s injured leg and he dropped down on the mat. It made his opponent’s job easy and the Chinese fighter picked up the TKO win at the 1:07 mark of the first round. But, the result is now under question according to a new report from ESPN.

The report suggests some suspicious betting took place in the hours leading upto the fight. Apparently, a big portion of the betting community put their money on Shayilan Nuerdanbieke to win in the first round. Although it is normal for fans to bet on their pick before the bout, the sudden flow of bets alerted U.S. Integrity to look into the matter.

U.S. Integrity is an independent company which helps sportsbooks and regulators to keep an eye on the market. Apparently, a huge amount of bets came on Shayilan Nuerdanbieke to finish Darrick Minner in the first round. Word circulated that Minner was injured ahead of the fight.

So the odds of Shayilan winning in round 1 went from -220 to -420. Even that did not stop fans from placing bets. Hence, it raised questions of suspicious betting and upon U.S. Integrity’s evaluation, the betting companies stopped taking any further bets on the fight.

As reported previously, The Ultimate Fighting Championship (UFC) no longer allows the fighters or their associates to place bets on fights. According to a statement from UFC executive Hunter Campbell, it will prevent any unethical betting from taking place.

After the news broke, fans are blaming James Krause for the situation. James is known for gambling on fights and runs a discord server, “The 1% Club,” where he gives fans advice on what fights to bet on. Interestingly, James was in Darrick Minner’s corner for the bout last weekend. Krause also admitted previously that a majority of his income comes from gambling on fights.

Hence, the reports of betting irregularities made fans raise their fingers at the former fighter.

@TheJamesKrause have anything to say about this?

Krause needs to be investigated and likely jailed.
His discord server needs to be shut down.
Tried to scam his “1% club” for the Aldo fight too. pic.twitter.com/4uDHED2V0w

james krause is done. furthermore the lack of regulation around betting involving fighters, and coaches is insane and jeopardizes the legitimacy of the sport, and @ufc brand.

Despite fans smelling a controversy, the UFC gave a clean chit to both the fighters and their camps. According to the Dana White-led promotion, their official betting partners will investigate the issue, but they do not suspect any illegal activities for the time being.

“Like many professional sports organizations, UFC works with an independent betting integrity service to monitor wagering activity on our events,” the UFC statement read. “Our betting integrity partner, Don Best Sports, a leading global supplier of real-time betting data for North American sporting events, will conduct a thorough review of the facts and report its findings. At this time, we have no reason to believe either of the athletes involved in the bout, or anyone associated with their teams, behaved in an unethical or irresponsible manner.” (h/t via Yahoo! Sports)

What is your take on the unusual betting activity in the UFC Vegas 64 fight? Let us know in the comments down below.