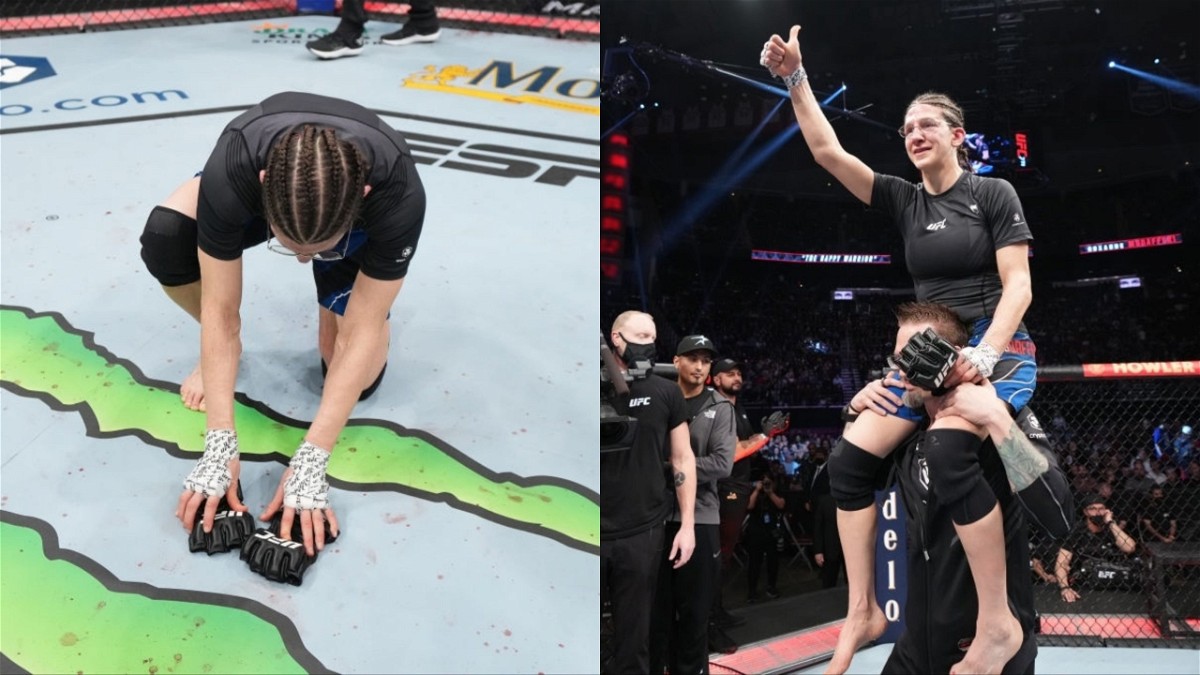 Roxanne Modafferi has hung up her gloves after a career that spanned over 3 decades. She is a pioneer of the sport as Modafferi was one of the very first female fighters to step inside a Mixed Martial Arts (MMA) cage. Hence, it seemed very disrespectful when the UFC cut away from the last walk out of her career.

The 39-year old fought Casey O’Neill in the prelims of UFC 271. However, it was not a fairytale ending for the fan-favourite fighter. She was fairly handled by O’Neill and lost the fight via split decision. After the contest, Modafferi laid out her gloves inside the octagon as a gesture of her retirement.

A legend and pioneer but sure just skip that. #UFC271

However, it has not stopped fans from expressing their disappointment on Twitter. Damon Martin of MMA Fighting pointed out ESPN’s snub of Modafferi. The MMA faithful questioned the move and wondered whether ESPN was aware of Roxanne’s impact on the sport or not.

They should’ve been the ppv opener. Between Roxy’s place in wmma history and oneill’s future trajectory, it just makes too much sense

One fan stated that the fight should have been the first fight of the much anticipated Pay Per View.

While another fan questioned the broadcasting channel. The prelims aired on the ESPN network and it’s streaming service.

Almost as disappointing as no Rogan!

Another viewer stated that they were disappointed with the move. They compared it to the lack of Joe Rogan’s presence at UFC 271.

Here in Latin America it was aired. She was all smiles! #UFC271

However, a spectacular from Latin America added that the walkout was shown in that region. Hence, the issue must have been a North American one.

MMA personalities from all around the globe congratulated Roxanne Modafferi on an amazing career. The 39-year old finished her career with a record of 25 wins and 20 losses out of the 45 fights she had.

Here are some of the tweets:

There aren’t many true OGs left in MMA. Roxanne Modafferi is exactly that. Tonight #UFC271 is her last ride. Some words on “The Happy Warrior” and a 20-year journey that has meant so much to so many. https://t.co/EQMDT4l9I4 pic.twitter.com/dxG1ReCtho

There will never be another Roxanne Modafferi. Happy trails, Happy Warrior. #UFC271 pic.twitter.com/zkSotZlZVc

Take a bow ladies! Roxy, you are a pioneer for the women of this sport. Happy retirement, and best of luck with everything you do!
Great performance from King Casey tn! #UFC271

Thank you for being you @Roxyfighter
This sport was better for having you in it. You will be missed #ufc271 pic.twitter.com/QQpVVNo487

“Zero Wrestling” – Khamzat Chimaev Calls Israel Adesanya Easy Money, Says He Will Finish Him Inside One Round