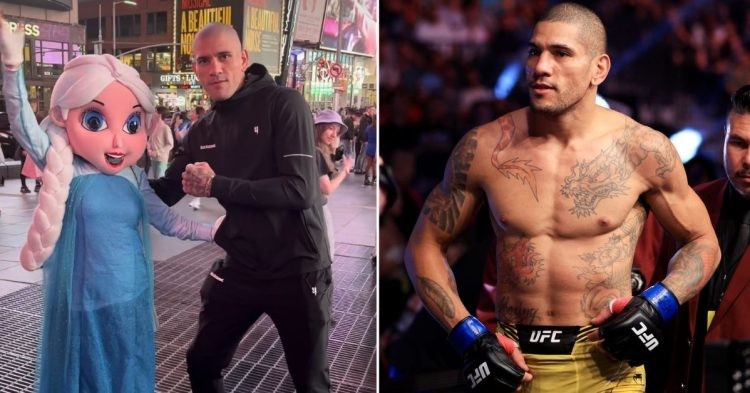 Alex Pereira is leaving no stone unturned by taking a jibe at Israel Adesanya ahead of the grudge match at UFC 281. From mocking his training style with Tennis balls, to using a hoverboard for practicing, it won’t be wrong to say that Pereira is getting on Adesanya’s nerves.

“This ni**a giving me fuc****g mad Costa vibes bro.” Adesanya said. “Hoverboard thing and I was like, I didn’t even know that was a dig at me, so I was like, okay whatever. And then he recently did the Tennis ball thing. I have seen that on Instagram and I was just like, okay.” Adesanya had said.

However, that has not stopped Pereira from taking repeated jabs at the Middleweight champion. Most recently, Pereira posted a video with the movie Frozen’s character Elsa in a sharp reminder of Adesanya’s call out of Poatan back at UFC 276.

“It’s easy to knockout, what’s the hillbilly’s name [Sean Strickland] because he was parrying the jabs but like I said at the press conference, the next time I put you on skates, you’re going to get frozen like Elsa.” Adesanya had said in the post-fight Octagon interview after his win over Jared Cannonier.

Poatan walking out to Let it Go would be fun

And now, fans have come out with a suggestion for Alex Pereira’s walkout song for UFC 281. It’s not a hard guess!

“Elsa says she won’t freeze me.” Pereira captioned the post as he mocked Adesanya. Even the fans have mocked the Stylebender for his use of words, some even going to the stretch of making a new poster for UFC 281.

Pereira and Adesanya competed on the same card at UFC 276. While Adesanya made his walk to the Octagon with WWE Superstar The Undertaker’s theme song, “Rest in Peace” running in the background, Alex Pereira used Itsari by SEPULTURA as his walkout song for UFC 279.

“For me, it makes no sense because I don’t watch cartoons. What are you going to do? Put me on the fridge?”

Do you think Pereira will walk out to “Let it Go” by Idina Menzel at UFC 281 as he looks to dethrone Israel Adesanya to become the new UFC Middleweight Champion of the world? In less than a week, we will find out.
Tags: Alex PereiraIsrael AdesanyaUFCUFC 281
Previous Post