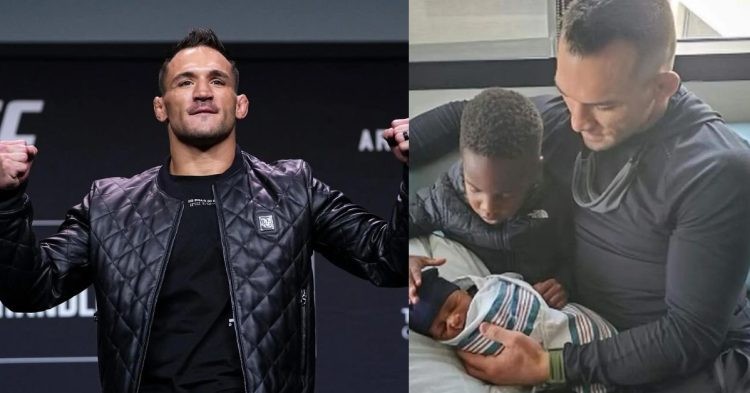 UFC lightweight Michael Chandler is one of the most entertaining fighters in the division. Chandler is coming off an impressive KO win over Tony Ferguson and is now set to face Dustin Poirier at UFC 281.

However, he is also known for being a great role model and an amazing father. Chandler and his wife Brie are already parents to a son named Hap whom they adopted in 2017. Ahead of UFC 274, the couple adopted another son – Ace. Chandler took to Instagram to announce their latest family member.

In a recent video on YouTube with Brendan Schaub, Chandler discussed the responsibilities of being a father and the adoption process. Chandler said: “I truly believe that I was put on this earth to be Hap’s dad, to be Ace’s dad.”

Many people questioned why Chandler and Brie adopted two kids who are African-American. Some people also made comments that there’s no way Chandler would love those kids like his own. Chandler talked about it and thinks that is a “very shallow way” to look at it because, in the end, we are all human beings.

Michael Chandler discusses how he adopted his second child

Michael Chandler did not have many issues when he adopted Hap and Ace. However, some people are not so lucky as they have to wait for years before the adoption process is complete.

Chandler also talked about the adoption process in great detail and stated that he is in a community where he helps people who want to adopt or are already on a long waiting list. Chandler revealed that there is a lot of paperwork and background checks including an FBI background check, criminal history, and physical background check.

When Schaub asked Chandler why he adopted two sons instead of having their biological children, he said his wife has always been interested in adopting kids. Moreover, after adopting their first son, they already knew that they will adopt a second child. Chandler also said:

“Whether it’s biological children or adopted children – children of any sort or however any means that you create the family it’s such an amazing thing.

And it’s the greatest title that you will ever attain and acquire because as men we’re wired to go attain, acquire, build, create but the most important title that we’ll ever have is dad.”

Apart from being a good fighter, Chandler is a great human being. Chandler and his wife also get praised for what they did. Some people including Schaub truly believe that and think that this world needs a lot of Chandlers.

Other people also think that Hap and Ace won the lottery because of their father’s fame. However, Chandler thinks the opposite and believes that their lives have been enriched after they adopted their kids.