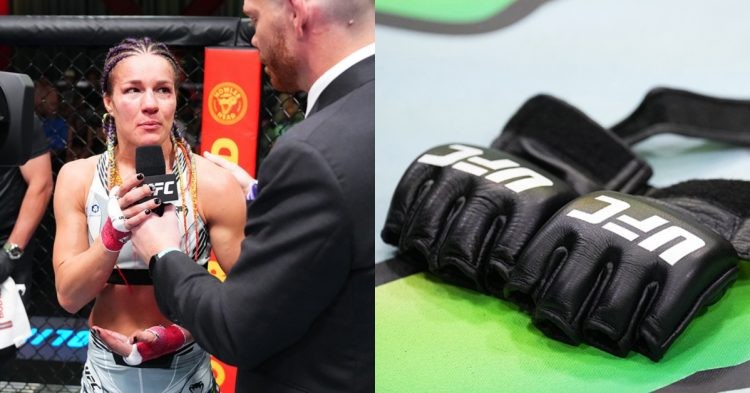 37-year-old Felice Herrig has announced her retirement! She just faced off against Karolina Kowalkiewicz in the prelims of UFC Vegas 56. It was a rematch of their first fight that happened in 2018. Herrig lost the bout via judges’ decision last time. But the opportunity was there to avenge her loss tonight.

However, she fell short once again as she was submitted in the second round of the rematch against Karolina. Ahead of the bout, Felice had lost all 3 of her last bouts. Hence this loss increases the tally to 4. Being on the wrong side of the 30s is not ideal in the sport of MMA.

Back in a 𝐁𝐈𝐆 way 😤@KarolinaMMA earns the R2 submission to launch herself back into the win column.

Unlike 4 years ago, Herrig was not even able to drag the contest to distance this time around. She looked slow in the Octagon and Karolina being the crafty veteran that she is, snuck in the choke and made Felice tap at the 4:01 mark of the second round. With the win, Karolina snaps her losing streak of 5 fights.

Felice Herrig retires after a career of 13 years

Understandably, Felice Herrig looked distraught after her loss to Karolina Kowalkeiwicz. After the bout, she was interviewed by UFC legend Paul Felder in the Octagon. Speaking to Bisping, She revealed that she is not at her best anymore. Hence she wants to end her MMA career with dignity. She said,

“It’s been an honor being in the UFC for eight years, and fighting for 20. … I knew if I wasn’t feeling it in the cage, it was going to be my last fight. Not in a bad way, I just feel like there’s something else for me and it’s time to close this chapter I my life.” (h/t via MMA Junkie)

She began her journey in the UFC after beating Lisa Ellis in 2014. She subsequently went on to have a very decent career in the promotion. Felice has had 10 fights in the UFC with a record of 5-5. During her prime, she beat the likes of Justin Kish, Alexa Grasso and Cortney Casey.

In an ironic twist of fate, her 4-fight losing streak began with a loss to Karolina and she will end her career after losing to the Polish fighter as well. Although it is always sad to see a veteran end their career on a loss, but if their heart is not into fighting anymore, then it is best to call it a day rather than hanging around. Here at SportsManor, we wish her all the best in her future endeavours.