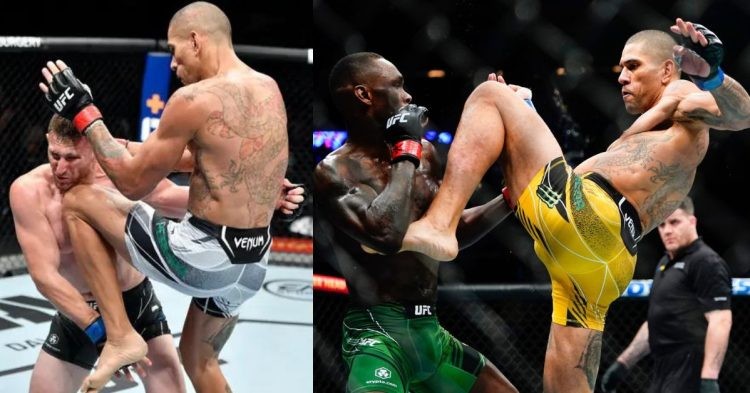 Israel Adesanya lost his middleweight title to Alex Pereira in the main event of UFC 281. It was a competitive matchup even if Israel Adesanya won majority of the first four rounds. Alex Pereira made a historic comeback in the 5th round and secured a TKO win against Adesanya.

Israel Adesanya gave the credit to Alex Pereira after his title win at UFC 281. However, he was not happy with the stoppage as he believes he could have survived that fight ending sequence had the referee Marc Goddard allowed the fight to continue.

Marc Goddard received a lot of backlash from Adesanya’s fans over the “early stoppage“. However, many fans and MMA experts support Marc Goddard for stopping the fight at the right time. And one of them is Georges St-Piere‘s long time coach, Firas Zahabi.

On his YouTube Channel, Firas Zahabi even stated that Alex Pereira could have ended Israel Adesanya’s MMA career had Marc Goddard not stopped the fight.

Alex Pereira is one of the most decorated kickboxers to ever compete in UFC. Pereira secured a brutal flying knee knockout on his UFC debut against Andreas Michailidis. And Zahabi believes Pereira would have thrown a scissor knee had the referee did not intervene.

“Pereira could have very possibly ended Adesanya’s career if the referee did not intervene, Guys, if the referee did not intervene, a scissor knee was coming. Guys, the greatest scissor knee I have seen in all of combat sports, ever, is Alex Pereira. It’s an incredible knee from a giant, who’s incredibly explosive. He throws it incredibly quick. I thought when Adesanya was dazed like that, the knee was coming. If Marc Goddard did not step in, it could have been a serious concussion, broken jaw, broken orbital, fractured skull even. It could have been something that ruined or ended Adesanya’s professional career. So I’m very grateful that Marc Goddard stopped it.”- Zahabi stated

Alex Pereira’s Scissor knee and Was Israel Adesanya ready for it?

The current UFC middleweight champion made his UFC debut against Andrea Michailidis at UFC 268. Pereira did face some adversitites with Michailidis’ wrestling in the first round. However, the Brazilian mixed martial artist delivered a vicious flying knee and knocked down Michailidis early in round 2.

So Firas Zahabi’s claims about Alex Pereira potentially hurting Adesanya badly with a scissor knee can not be denied. However, Adesanya has claimed that he was not completely out during when Marc Goddard stopped the fight.

Israel Adesanya has even stated that he was aware of the knee that Pereira might throw in that situation. In his recent appearance on MMA hour, Adesanya even said that he was waiting for Alex Pereira to gas out while trying to finish the fight.

“I was waiting for him to take big shots so I put my head down like this. I can see his arms and I can see his legs. That’s all I need to look at.”– Izzy stated

Adesanya is certainly unhappy with the stoppage at UFC 281. However, he will have the opportunity to rewrite the history in a rematch. Even though the rematch is not confirmed yet both Adesanya and Pereira have agreed to end their rivalry with another fight inside the octagon.