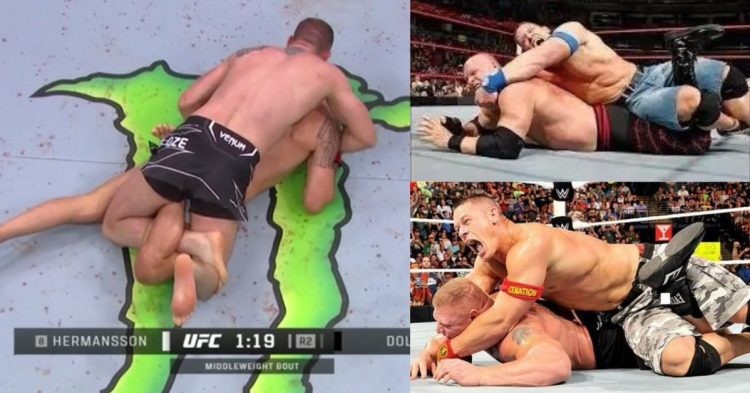 Roman Dolidze attempted the first-ever STFU submission in the UFC, a submission used by John Cena in WWE. At UFC Orlando, Dolidze got very creative and almost got a submission win using this calf-slicer technique. During the exchange, Dolidze caught Hermansson in a calf crusher and later mounted on him to pick up a win via ground and pound. The position almost gave the impression of an “STFU” submission move, made famous by WWE Superstar John Cena.

However, Dolidze got the victory by TKO after he trapped Jack Hermansson in that position and rained down some vicious shots from the top. Hermansson couldn’t do much to escape from that and the referee called the fight.

It would’ve been the first time in the UFC if Dolidze got the win via submission. This calf-slicer looked similar to Cena’s submission special and fans went frenzy after witnessing this. Former lightweight champion and submission specialist Charles Oliveira also reacted. Oliveira wrote: “Wow, I imagined Dolidze would sub via calf slicer.”

Wow, I imagined Dolidze would sub via calf slicer.

Dolidze is an incredible grappler and was very quick to reverse Hermansson on the ground.  UFC fans also took to Twitter to react to this rare moment and thought they almost got a WWE-like finisher in the Octagon.

Roman Dolidze is a very talented grappler but no one thought that he’d go John Cena mode at UFC Orlando. The nasty calf-slicer is being called STFU – made popular by Cena and this was the first time the fans saw something like this in the octagon.

Check out the tweets by fans referring Dolidze’s calf-slicer to Cena’s STFU finisher.

@JohnCena would be proud! 😂that was disgusting

Just how good is john cena?

Holy shit Dolidze with the STFU TKO!!! That was insane.

Holy shit it was the first ever STFU in UFC history. S/o @JohnCena… @ChaelSonnen thoughts? https://t.co/j6a8YNbAm6

Roman Dolidze was so close to the first STF finish in UFC history#UFCOrlando https://t.co/rHlOCaAGrL

Dolidze proved how creative he is and after scoring the biggest win in his career at UFC Orlando, he hopes to climb up the ladder of the middleweight division. After finishing Hermansson, Dolidze called out Khamzat Chimaev and hopes to fight him next.