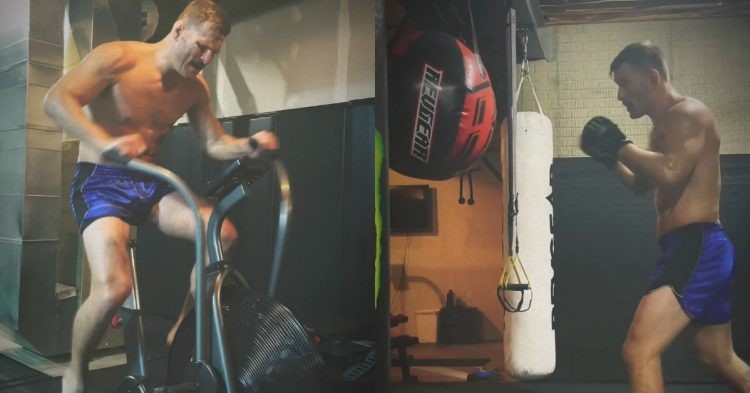 Stipe Miocic is in the shape of his life, ahead of his rumoured return to the Octagon. Miocic last fought at UFC 260 on March 27th 2021, against Francis Ngannou. Unfortunately for Stipe, he was on the receiving end of a brutal knockout in that fight and lost his UFC heavyweight championship.

The 40-year-old kept himself away from the limelight ever since. Fans were anxious to know when the Ohio native may return to the Octagon. Although there is no official word on his next fight, it looks like Miocic is certainly ready for battle. Stipe recently posted a workout video on his Instagram account. In the video, Miocic did some cardio work, shadow boxing and some pad work.

However, what surprised the fans most, was his shape. In the video, it was evident that the former champ was putting on a lot of muscle. Previously, his good friend Chris Weidman also noted that Miocic was working hard to build a bigger frame. The recent Instagram video certainly hints towards that.

Former UFC middleweight fighter Chael Sonnen recently claimed that Stipe set a goal for himself to reach 250lbs. Hence, Stipe’s workout supports the claims of him wanting to be bigger for his return fight to the UFC.

UFC President Dana White recently gave some insight into what is going on with Jon Jones and his much-awaited UFC return. In the build-up to UFC 280, Dana revealed that Francis Ngannou and Stipe Miocic are Jon’s only options for his heavyweight debut at the moment. White also added that Jon will come back in 2023, despite reports of him fighting at UFC 282.

Although Jon is most likely to fight Francis Ngannou, he may have to take on Stipe Miocic if The Predator does not heal in time. The 35-year-old is not the hardest puncher in the world. He utilizes his big reach and has a more conservative approach. On top of that, Jones is a significant threat when it comes to wrestling. In that case, putting on the weight may end up backfiring on Stipe.

But Jon himself is getting bulkier for his heavyweight debut. That may change the dynamics of the potential match-up. While the 205lbs version of Jones was nimble with his foot movement, can a heavyweight Jon replicate the same? Jon waited over 2-years to make his transition from light heavyweight to heavyweight as smooth as possible.

In some recent training footage, Jon was seen hitting some powerful blows. So there is a chance that Jones, at heavyweight, may turn into more of a striker. In that scenario, Stipe Miocic weighing in at 250lbs will allow him to absorb the punches much better.