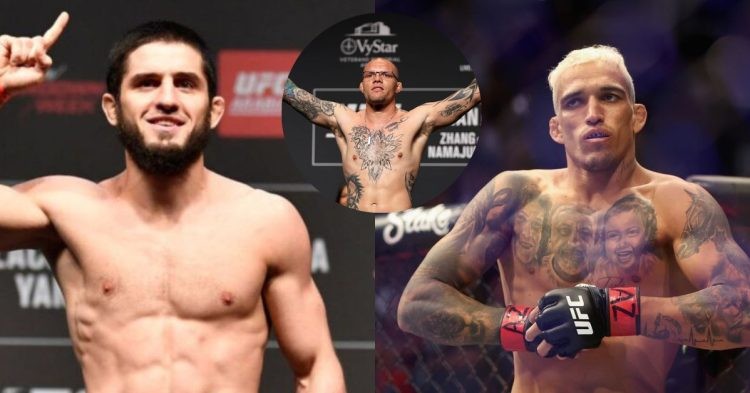 UFC star Anthony Smith gave his take on the highly-anticipated lightweight title fight between Islam Makhachev and Charles Oliveira at UFC 280. This fight will be the final ground to answer who is the best lightweight on the current UFC roster.

Makhachev will face the former UFC lightweight champion, Oliveira, for the vacant UFC lightweight title that Oliveira was stripped of for missing weight in his fight against Justin Gaethje.

In an episode of MMA Pros Pick with James Lynch, Smith recalled picking against Oliveira when the latter faced Michael Chandler, Dustin Poirier, and Justin Gaethje. Anthony suggested that his predictions were swayed by public opinion against Oliveira, who has always been an underdog in his fights.

Talking about the matchup between Islam Makhachev vs. Charles Oliveira fight, Smith stated: “It’s a hardcore’s dream. I think that his grappling is going to be dangerous for Islam.

‘Lionheart’ put forth his opinion that Oliveira is capable of absorbing significant damage but acknowledged that his striking has significantly improved as of late. And whenever, Charles has hit the ground after getting rocked, his grappler instinct has taken over him which made him win the fights.

Who Has the Better Chance to Win the Title Fight Between Islam Makhachev and Charles Oliveira?

UFC 280 will see the new lightweight champion between two of the best lightweights of the current generation in the promotion in Charles Oliveira and Islam Makhachev. The Russian is known for being an elite Dagestani wrestler, while the Brazilian is infamous for being the best submission specialist with the most wins via submission in the UFC.

Currently, Makhachev is on a 10-fight win streak, while Oliveira hasn’t been defeated in his last 11 bouts. With each fight, Charles has improved overall as a fighter. Despite that, Charles has always been underestimated by everyone.

Oliveira’s striking has been tested against the best strikers in the division like Poirier, Gaethje, and Chandler. The Brazilian has shown his incredible rock-hard chin and ability to snatch a victory where he had little chance of winning.

Smith stated that despite being an exceptional wrestler, Islam is unlikely to hurt Charles Oliveira from the top position. He noted that while Makhachev could maintain top control and outpoint Oliveira, ‘do Bronx’ would pose a huge submission threat in the grappling exchanges.

“I think that’s a dangerous game to play with Charles Oliveira.”

In the end, Smith has stated that he will be rooting for ‘do Bronx’ to defeat Islam Makhachev. Oliveira will meet Makhachev for the vacant UFC lightweight title at UFC 280 on October 22.