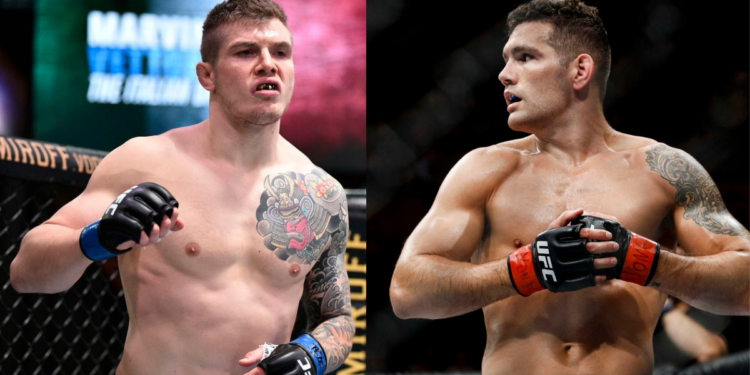 Former Champion Chris Weidman got back to winning ways after he picked up an impressive unanimous decision win over Omari Akhmedov in the co-main event of UFC Fight Night: Lewis vs Oleinik. While many fight fans called the fight sloppy, Weidman showed an incredible display of grappling later in the third round to cement his win. Soon after the victory, #14 ranked Marvin Vettori called out Chris Weidman.

Weidman looked horrible tonight. He’s a former champion let me whip his boring ass next.
Guarantee you he will hide like all the other guys.
Me against @chrisweidman needs to happen. @Mickmaynard2 @ufc

Marvin Vettori is currently enjoying a three-fight win-streak, with notable victories over Cezar Ferriera. Vettori earned the Performance of the Night bonus in his last fight against Karl Roberson at UFC on ESPN: Eye vs Calvillo. Vettori’s last loss inside the octagon was a split decision loss over the current Middleweight Champion Israel Adesanya. Marvin Vettori came close to dethroning Adesanya and has since then picked up three straight victories. Vettori will look to further cement his position in the division with a win over Chris Weidman. He is a solid contender in the division, however, it will be unlikely that currently, unranked Chris Weidman will accept the fight against Marvin Vettori.

I swear I’ll have weidman begging me for air by the 2nd.
Let’s book this! @ufc @Mickmaynard2

Chris Weidman’s win over #11 ranked Omari Akhmedov puts him above Marvin Vettori in the rankings. It will be unlikely that Weidman will fight an opponent ranked lower than him after expressing his desire to fight for the UFC Middleweight gold once again.

Marvin Vettori finally grabbed Weidman’s attention after several jabs, who asked him to get a win over a ranked opponent first.

Hei Chris how are you? Just checking on you making sure you still wanna be relevant in this division.
See you soon Christina 🤩 @chrisweidman

Yo, Dork hop off my nuts and get a win over someone in the top 15 for 1st time in ur life! I have been beating guys in the top 15 for ten years straight. Relevant😂?There's a reason you are calling me out.. I'll fight again when I'm ready too.. And btw you aren't that good 😂 ✌️ https://t.co/NsgVXPSDP7

How can I beat anybody in the top 15 if nobody accept fighting me? You have gone 2-5 in your last 7 being koed in every single one of those 5 loss
I want my first former champ on my record.
Don’t tell me that after one weak win you are already pick and choosing opponents

It’s an interesting match-up for the UFC Middleweight division. Both the fighters re excellent grapplers and proficient strikers. Vettori took down Israel Adesanya and dominated the current Champion on the ground when they faced each other back in April of 2018. After getting global recognition with win over Anderson Silva, Weidman failed to keep his shine. After two successful title defense, Weidman suffered back to back losses inside the octagon. With one win over Kelvin Gastelum in the past, Weidman has been knocked out on all occasions in his last three fights. It will be interesting to see how he will fare against someone as strong and big as Marvin Vettori.