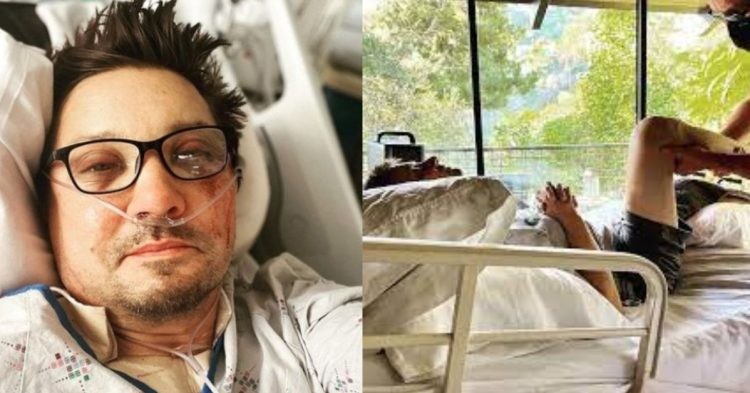 There were many rumors revolving around Jeremy Renner and his fate following his accident. Renner was attempting to help a stranded family member when he was run over by his own snow plow despite his attempts to enter the vehicle and stop it. The Hawkeye actor suffered blunt chest trauma and severe injuries to his lower body as a result of this accident.

The MCU star did take to social media to thank his fans for their support after he recovered slightly. However, rumors of Renner needing to have his leg amputated began swirling despite the update. It seems the Mission Impossible actor has once again decided to address and quash this hearsay.

Jeremy Renner posted a picture of himself, with both legs intact, on Instagram. Renner said in the caption, “Morning workouts, resolutions all changed this particular new years …. Spawned from tragedy for my entire family, and quickly focused into uniting actionable love  I want to thank EVERYONE for their messages and thoughtfulness for my family and I …. Much love and appreciation to you all.”

“These 30 plus broken bones will mend , grow stronger, just like the love and bond with family and friends deepens . Love and blessings to you all,” concluded Renner in the caption. It seems Renner did not need to have his leg amputated after all. And this post by Renner also seems to confirm that the Hawkeye star will make a full recovery.

A lot of support and well-wishes poured in from Jeremy Renner’s co-stars and peers when he first provided an update about his condition. Stars like Chris Hemsworth, Chris Evans, and many more commented on his post, wishing him a speedy recovery. Even stars from the world of combat sports joined in to send their best wishes to the MCU star.

Among those athletes were UFC lightweight Grant Dawson and Glory Kickboxing heavyweight champion Rico Verhoeven. And this time seems to be more of the same as many celebrities liked and commented on the post wherein Renner shared a recovery update. Current UFC commentator and former middleweight champion, Michael “The Count” Bisping liked Renner’s post. It seems the retired champion is a fan of Jeremy Renner.

It is well-known that Jeremy Renner is a fan of combat sports. Renner was present at UFC 246 as he was spotted enjoying the event with co-actor, Dave Bautista. It seems the appreciation goes both ways as personalities in the combat sports world, like Jeremy Renner’s fans, want the actor to recover as soon as possible.