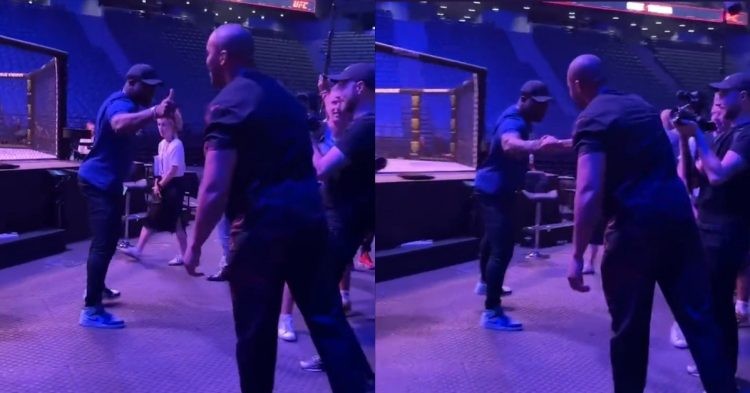 UFC Paris goes down this weekend and the heavyweight champion Francis Ngannou is now in town for the event. The card features a lot of great match-ups. Charles Jourdain vs Nathaniel Wood and Robert Whittaker vs Marvin Vettori are just a few examples of great fights on the card. But it will feature Ciryl Gane vs Tai Tuivasa in the main event.

As fans know, UFC‘s very first PPV of 2022, UFC 270, featured Francis Ngannou vs Ciryl Gane in the main event. Then interim champ Gane went up against the undisputed champ Ngannou to unify the titles. The fight had a lot of hype around it as Bon Gamin was viewed as the next big thing in the division.

However, that was not meant to be as Francis surprised everyone with his wrestling skills. Not only did he refuse to engage in striking, but Ngannou also did his best to keep Ciryl on the ground for the entire duration of the fight. He succeeded in doing so and retained his title via the judges’ decision.

The champ shows respect to his former challenger 🤝 #UFCParis

But it does not look like they held a grudge. Ahead of the ceremonial weigh-ins, Francis walked into Ciryl and they were seen sharing a friendly fist bump. Heading into their first fight, there was a lot of animosity between Francis and Gane’s camp. However, it looks like they have finally moved on from it.

The fight between Francis Ngannou and Ciryl Gane at UFC 270 was more than just a combat event. Many fans may know that Gane and Ngannou were teammates previously. Both used to train at MMA FACTORY under coach Fernand Lopez. But the relationship between them soured so much that it led to Ngannou’s exit from the gym.

The Predator trained in the gym from 2013 to 2018 before moving to Xtreme Couture. Both Lopez and Ngannou had a lot of accusations against each other. Francis stated that Lopez had a constant urge of being famous. In return, Lopez also stated that Gane got the better of Ngannou on a regular basis during their sparring in the gym.

However, in fairness to Lopez, he stated that he will not continue the beef with Ngannou following UFC 270. The coach has stuck by his word and hasn’t mentioned Ngannou ever since. But Francis never had any problem with Ciryl Gane and his fist bump with him ahead of the Paris event proves it.