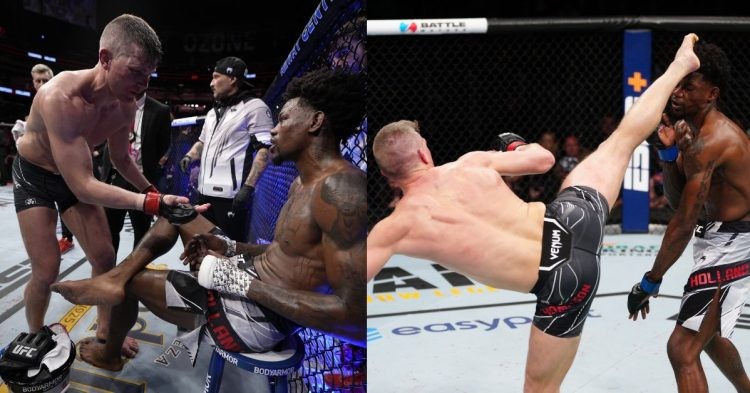 Stephen Thompson and Kevin Holland had a fight that will be talked about for a long time. The 39-year-old ‘Wonderboy’ proved that he’s still got it and is definitely among the elite welterweights.

Meanwhile, Holland always wanted to fight a striker like Thompson and got his wish. He displayed an incredible show of tenacity and durability. Holland rocked Thompson earlier in the fight, however, later suffered a hand break from a spinning kick by ‘Wonderboy’ but refused to quit.

Kevin is tough as hell 🤯#UFCOrlando

What an awesome fight. Wonderboy clinic of martial arts Holland clinic on toughness

you rareley see the towel thrown in in MMA. Honestly that was for kevins own good. mad respect to holland for his toughness and his corner. they actually care about Kevin’s health #UFCOrlando

Shout out to hollands corner. I think they made the right call. No fighter wants that to happen, but sometimes you need your coaches to save you from yourself. He was taking major damage in there. What a great show by both men! Congrats @WonderboyMMA on a great win! #UFCOrlando

Congratulations to still dangerous @WonderboyMMA and happy retirement to @Trailblaze2top

The shot Thompson took in the 1st off the forehead that rocked the shit out of him ended up winning him the fight 😂 Crazy ass sport. That was a damn good fight. Congratulations @WonderboyMMA you definitely got the skills to pay the bills. #UFCFightNight

Belal Muhammad, who beat Thompson tweeted this, and looks like he wants to watch Thompson vs. Jorge Masvidal again. ‘Wonderboy’ beat Masvidal in their first outing and displayed an incredible striking class.

Fans were loving this fight and so were Thompson and Holland. None of them wanted to grapple and when they ended up on the mat, they let each other up to continue fighting on their feet. Nowadays we rarely see corner stoppages in UFC fights but after watching Holland taking all the punishments in the fight, it was a wise decision from Holland’s corner to throw in the towel.

Stephen Thompson and Kevin Holland put on a masterpiece in the main event of UFC Orlando. UFC fans had a treat watching two traditional strikers go against each other. This battle of Karate vs. Kung Fu will be talked about for some time.

Holland proved that he is a warrior, he absorbed a ton of damage from Thompson’s attacks, and even after suffering a broken hand, he continued fighting. However, his corner called it in the 4th round fearing Holland’s health.

Holland’s coaches should do him a favour & mercifully stop this fight, Kevin’s absorbed so many clean kicks.

Looking at Holland’s condition, UFC welterweight Belal Muhammad tweeted this. He said this is why he wrestles.

And that’s why i wrestle

However, fight fans generally love a striking battle and they were loving this fight until it was stopped.

Kev Holland after this fight: pic.twitter.com/YkecX5mjRW

Big props to his corner for stopping the fight. Didn’t need another round of that. Kevin is too tough for his own good. Great fight.

Fans loved this battle but also feared for Holland’s health. They took to Twitter and stated that this fight should be stopped and that’s what happened. With this win, Thompson has bounced back from his losses and will now be looking to add some more wins to add to his incredible fighting resume.

On the other hand, Holland will need to take some time off to recover and if he doesn’t retire like he said he would, we will see him fighting in the next year.