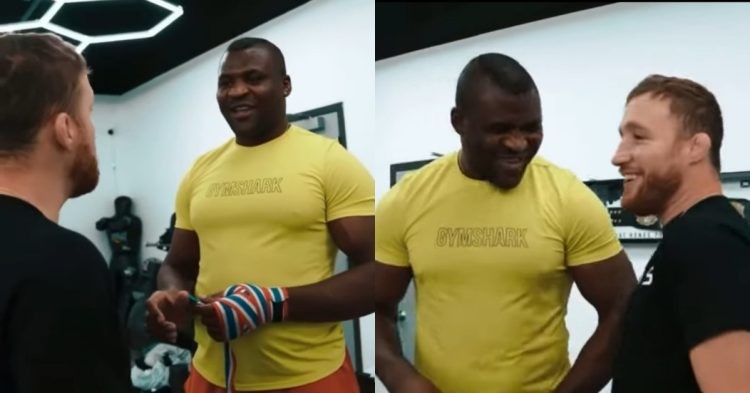 During one of his training sessions, two-time lightweight title contender Justin Gaethje was present in the room. It seemed like he was really impressed with Francis’ muscular stature. Gaethje even had to feel up the UFC heavyweight champ’s biceps to really believe what he was seeing with his own very eyes!

Once Gaethje told Nagnnou that he looks “scary,” Francis obliged him with a humble smile and replied, “A lot, a lot more than I used to weigh, It’s been six months though… six months since I last fought.” When Justin guessed his current weight to be more than 300lbs, Francis stated, “No, no, no, not 3 (300lbs). Yeah, 290-293lbs.” (h/t via @xcellentmma)

The champ’s injuries were very serious indeed. Not only did he tear apart his ACL, but Ngannou also had issues with his MCL too. Fighters often do not recover from such serious injuries in a swift manner. Hence, Francis did not rush back into the Octagon, instead, he took his time to fully heal. Judging by his current physique, he certainly made the right call.

Francis Ngannou was rumoured to face Jon Jones at UFC 282

UFC and MMA fans all around the world got extremely excited once they got to know that Jon Jones is coming back sooner than later! Reports circulated earlier that the former light heavyweight champ will be making his long-awaited heavyweight debut at UFC 282. It was also reported that the promotion desperately wants Ngannou to be the opponent.

As mentioned, Ngannou is finally starting to train in a proper manner. So the prospect of him returning in December is slim. So fans can expect to see that champ back in action very early next year. As for his next opponent, Jon Jones is rumoured to be fighting Stipe Miocic for the interim belt. If that is the case, then it sorts out the next opponent for him.

However, if that does not happen for some reason, then the possibility of a rematch against Ciryl Gane is also there. Gane recently knocked out Tai Tuivasa in the main event of the very first UFC event in France, UFC Paris. So the possibility of seeing Ngannou vs Gane 2 go down in their home country is certainly mouth-watering.

But there also remains the situation regarding his contract. Ngannou’s contract will be up after his next fight. Although Francis is open to re-signing with the UFC if the offer is right, there are also rumours that The Predator may leave. So his next fight becomes very important for the UFC.

Who do you want to see Francis Ngannou face once he is fully fit? Do you think Jon Jones is the obvious choice? If not, let us know your choice in the comments down below.