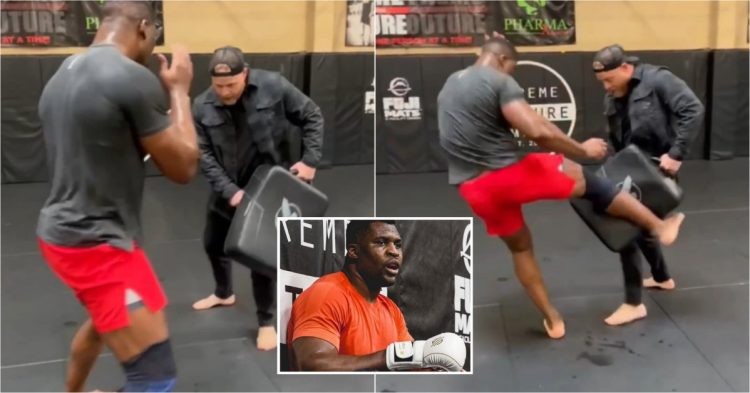 UFC heavyweight champion Francis Ngannou (17-3) is inching closer to his return to the promotion. The champ showed incredible courage and fought with a bad knee injury at UFC 270 against Ciryl Gane. Striking against a fighter as dangerous as Gane, on one good leg, would have been foolish. Hence, Francis flexed his wrestling muscle and beat Ciryl with his impressive ground game.

Ngannou primarily used wrestling because his knee was compromised. However, it looks like Ngannou is ready to throw kicks once more! Earlier in the year, Ngannou underwent surgeries to fix the ACL and the MCL injuries he suffered in his knee. Reconstructive surgeries such as that take a lot of time to heal. So is the case with Ngannou, who has not fought in over a year.

Recovery update from the heavyweight champ 😤

But recently, The Predator revealed some training footage on Instagram and it will give fans some encouragement about his recovery. In the footage, the 36-year-old was landing some thudding blows on the pads. What was more impressive, was the fact that he was throwing the kicks with his recently healed leg. So it appears that Ngannou is really close to full recovery.

Francis Ngannou is rumored to fight Jon Jones at UFC 285

The UFC heavyweight belt has remained inactive since January 2022. However, Ngannou’s training footage is a sign that he will defend the belt very soon. In the last few days, reports came out that Francis will fight Jon Jones at UFC 285 in March 2023. But, this is not the first time the fight has been rumored to be in the works. UFC wanted the match-up to take place at UFC 282 as well.

But Ngannou was not fully fit to make it on December 10th. So the promotion booked Jan Blachowicz vs Magomed Ankalaev for the last PPV of 2022. But, fans will not have to wait for too long as UFC 285 is set to take place in March next year. It is good to see that Ngannou is slowly getting his knee back in shape.

Jon Jones (26-1-1) throws oblique kicks that hype-extend the knee. Hence, Ngannou would have been in danger of injuring the knee even more badly, if he rushed the process. His full fitness will also ensure that Ngannou is nimble on his feet and dodges Jones’ heavy punches and kicks. Ngannou is perhaps the most powerful puncher in the heavyweight division.

Fans saw during his rematch against Stipe Miocic at UFC 260 that Francis has worked hard on his quick reflexes. So Ngannou will look to replicate the same against Jon Jones to set up his trademark right hand. A fully fit Francis Ngannou taking on a heavyweight version of Jon Jones is the biggest fight that UFC can put on at the moment.