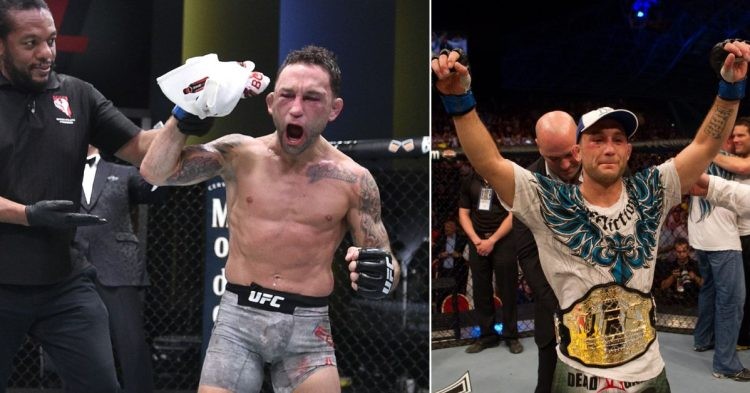 Frankie Edgar rested his gloves after an illustrious MMA career at UFC 281. It’s safe to say, he will go down as one of the greatest mixed martial artists of all time, and a future Hall of Famer.

Frankie Edgar has had 29 UFC appearances in his 36-fight career. Edgar made his UFC debut way back in 2007, against Tyson Griffin at UFC 67. Frankie is a former UFC lightweight champion with three title defenses to his name. He also challenged for the featherweight title twice and the interim title once.

Reflecting on the legacy of the legend @FrankieEdgar before his final fight at #UFC281 🎞️ pic.twitter.com/QgRkQJMmDC

Frankie Edgar has seven wins by knockout, four submissions, and 13 decision victories over his career. Taking into account his losses as well, he has been stopped only in four fights.

When did Frankie Edgar make his MMA debut?

Frankie Edgar’s MMA career started when he was 24 years old and he has been fighting for the UFC for 15 years. With an undefeated record of 6-0, he entered the UFC. Edgar suffered the first loss of his MMA career against Gray Maynard back at UFC Fight Night: Florian vs. Lauzon in April 2008.

Frankie Edgar has a UFC record of 18-11-1 and an overall MMA record of 24-11-1. The sole draw of Edgar’s career came against archrival Gray Maynard in his second title defense.

Frankie is a well-rounded mixed martial artist with NCAA Division 1 wrestling background. Under coach Mark Henry, he became prolific at boxing and sharpened his grappling with a black belt under Ricardo Almeida.

Edgar has eight Fight of the Night bonuses among the 11 bonuses he won throughout his illustrious fight career. He also holds the record for the greatest total fight time in UFC history at the time of his retirement.

Edgar has made a noteworthy run during his time in the UFC with distinguished opponents. B.J.Penn, Gray Maynard, Charles Oliveira, Cub Swanson, Urijah Faber, Chad Mendes, and Yair Rodrigues are some of the prominent names he has won shared the UFC Octagon.

He won the UFC lightweight championship after defeating B.J. Penn at UFC 112 and has three wins over the Hawaiian native. After a long, back-and-forth, predominantly standing fight, the judges’ scorecards were called on for a decision. The scores were (50–45, 49–46, and 48–47) in favor of Edgar.

Edgar met Maynard again after losing to him the first time around as lightweight champion at UFC 125, where both fighters fought to a draw. In their rematch at UFC 126, Edgar knocked Maynard out in the fourth round for which he earned a Knockout of the Night bonus. The bout marked his third title defense.

Edgar faced Benson Henderson on February 26, 2012, at UFC 144. Henderson defeated Edgar via a unanimous decision to become the new UFC Lightweight Champion. Edgar fell short in the rematch, prompting a move to the featherweight division.

Frankie Edgar made his featherweight debut against Jose Aldo for the interim Featherweight Championship. He lost the fight via unanimous decision.

He would go on to secure five straight victories against the likes of Charles Oliveira, BJ Penn, Cub Swanson, and Urijah Faber, and a vicious KO victory over Chad Mendes. The incredible streak awarded him an interim title shot against Jose Aldo. Edgar once again fell short against the featherweight legend via unanimous decision.

After earning a decision win over Jeremy Stephens and Yair Rodriguez, Edgar once again fought for the UFC Featherweight Championship against Max Holloway but fell short via unanimous decision.

Frankie Edgar made his Bantamweight debut against Pedro Munhoz in what turned out to be a controversial split decision win for the UFC legend. However, he would go on to drop back-to-back stoppage losses against Cory Sandhagen and Marlon Vera.

Frankie Edgar took on Chris Gutiérrez in his retirement fight at UFC 281 inside Madison Square Garden. Edgar suffered a brutal KO loss with a flying knee in the very first round, marking an end to his illustrious MMA career at the age of 41.

Lightweight champion, most fight time in UFC history, legend of the sport 🙌

The bout also marked his third straight loss KO loss, all of them coming via way of kicks. Needless to say, it wasn’t the retirement fight one would have hoped, but as Edgar said it in his last post-fight Octagon interview, “this sport is a bi***.”