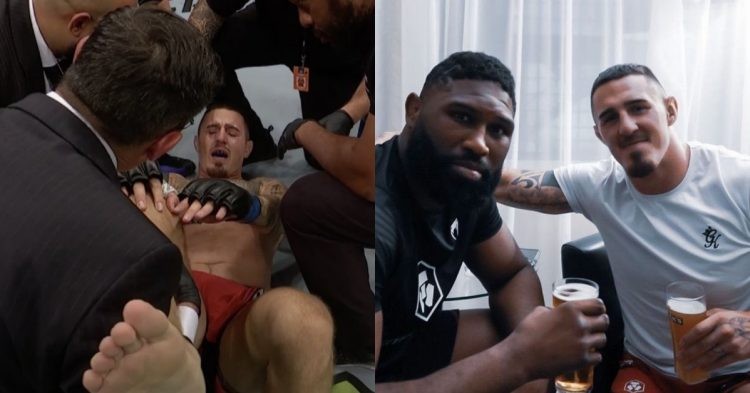 What a difference 3 months can make! In March, Tom Aspinall beat Alexander Volkov to close out a historic UFC Fight Night in London. But the same Aspinall had to leave the O2 Arena in a stretcher last night after a yet-to-be-identified knee injury caused his fight against Curtis Blaydes to end prematurely.

After 5 straight wins and finishes inside the Octagon, the Manchester native was flying high heading into the bout against Curtis Blaydes. A win would have put Aspinall in a firm position to become a prominent fixture of the Top 5 in the UFC heavyweight division. However, it was not meant to be as a leg kick caused Aspinall’s right knee to buckle.

Right after the kick landed, Tom screamed out in agony and immediately dropped down to the canvas. He was holding his knee after falling to the ground. It led to the commentary team speculating on what kind of an injury it really was. Although there is yet to be any official statement from Tom regarding his injury, he did however send a message to his fans.

On his official Instagram account, Tom posted a picture of himself with his opponent on the night, Curtis Blaydes. Although the injury was unfortunate, he was grateful for all the loving messages that he received from the fans.

The night was obviously a sad one for Aspinall. Not only did the injury cause Tom to suffer his first UFC loss, but it also has the potential to sideline Aspinall for a significant period of time. Depending on the seriousness of the injury, Aspinall will potentially be out of action for the rest of the year. It will also affect his standing in the division. Hence, this outing to the Octagon ultimately did more harm than good.

However, Molly McCann did not let Aspinall dwell on his misery. Known for her enthusiasm, Meatball Molly caught up with Tom after the event. She led the people in the room to break out into a Tommy Aspinall chant. The heavyweight fighter seemed to appreciate Molly’s attempt to cheer him up and he also joined in for a pint of beer.

Molly McCann had a good night in the office as she beat Hannah Goldy on the main card of UFC London. The other rising British superstar Paddy Pimblett also emerged victorious in his fight against Jordan Leavitt. He received perhaps the biggest ovation of the night and tore the house down with his ‘T-Bag‘ celebration after the fight.