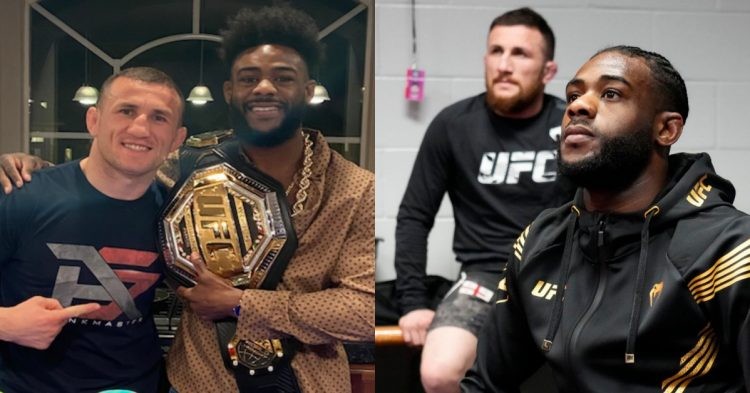 Merab Dvalishvili turns cameraman for his best friend and UFC bantamweight champ Aljamain Sterling. Known for their bromance, both Merab and Aljo are teammates. They both train together at Serra-Longo Fight Team. Hence, Dvalishvili is present in the United Arab Emirates (UAE) alongside Sterling for the latter’s fight against TJ Dillashaw at UFC 280.

Although the fight will take place on October 22nd, fighters have already reached UAE in advance to get acclimated to the conditions. Reaching the destination in advance gives the fighters the chance to explore the place. UAE is already a very big tourist attraction. Hence Aljo and Merab went out to roam around and that’s when Merab turned into Aljo’s personal cameraman.

Aljo was posing by the side of the world’s tallest building the Burj Khalifa. Merab put his skills to use and clicked a photo where it seemed like the 135lbs champ was as tall as the building and could touch the top of the building. The Funk Master posted a video of the entire scenario on his Instagram and wrote, “Merab must be protected! Best camera man that will kick a** too!”

Merab Dvalishvili is originally from Georgia. He started his journey in the UFC in 2017 against Frankie Saenz. Although he lost to Saenz and Ricky Simon back to back in his first two UFC fights, Dvalishvili has remained unbeaten ever since then and is currently on an 8-fight win streak. He gave all the credit to his brother and teammate Aljamain Sterling.

Following his last win over Jose Aldo, Merab spoke on the possibility of going up against Sterling for the bantamweight strap. However, he flat-out refused to do so as he is very close to Sterling. He does not contemplate taking on one of his best friends for even the chance of winning the UFC championship title. But not only that, even Aljo feels the same way.

.@TJDillashaw who TF have you beaten that is soOoOoo much tougher than the guys I’ve faced? 😂 This is Comedy Central. You should do stand up with @HenryCejudo. He’s your daddy, after he sonned your needled ass💉

In a world, where two best friends will turn on each other to have the opportunity to become the UFC champ, it is heartwarming to see the bond that Merab Dvalishvili and Aljamain Sterling share. Hence, it will not be surprising if Aljo actually moves up in weight to let his friend fight for the title in the near future.