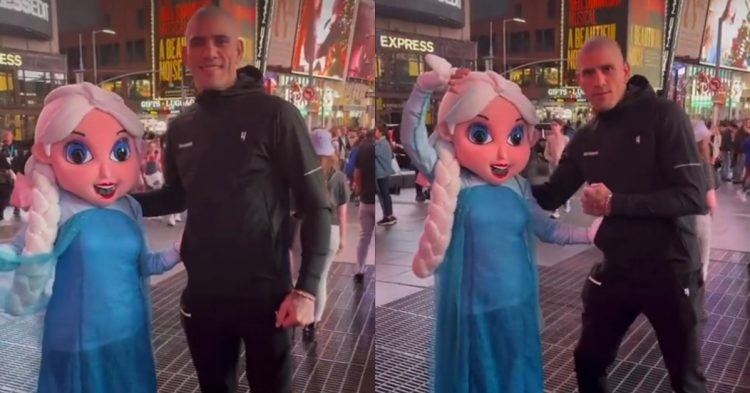 Alex Pereira (UFC record 3-0, MMA record 7-0) is a fearsome competitor inside the Octagon. In his 3 UFC bouts, he has already KO’ed two opponents in a brutal manner. Recently a video surfaced where Pereira stared down Israel Adesanya during their time at the UFC 276 press conference. It made the fans take Alex extremely seriously. However, in real life, Alex is quite the jokester himself and his constant trolling of Israel Adesanya proves it!

After beating Jared Cannonier handily at UFC 276, The Last Stylebender called out the next contender in line, Alex Pereira. In his post-fight interview, Izzy stated that he would leave Pereira frozen like Elsa when they fight. For fans who are unaware, it was a direct reference to the Disney movie Frozen and its protagonist Elsa.

It made sense, as Adesanya often leaves his opponents clueless when they are fighting him. However, Pereira did not see any merit in the comment and mocked Adesanya in a unique way. Right at the beginning of UFC 281 fight week, title contender Alex Pereira trolled the champ by posing with an Elsa impersonator as a call back to Adesanya’s promo after UFC 276.

This is not the only time when Alex Pereira took a shot at Israel Adesanya (UFC record 12-1, MMA record 23-1). The Last Stylebender does a lot of conditioning to improve his reflexes during his fight camp. One such exercise is to dodge incoming tennis balls, thrown at him. Poatan spoofed the exercise video with excellent comedic chops and it made for a really fun watch.

Adesanya also claimed that he will put Alex on “skates” as well. It looks like the 35-year-old will have an answer for that as well. Taking the comment in jest, Alex mockingly put on a pair of roller skates during one of his training sessions to prepare himself for Israel Adesanya’s threats. Pereira is not a man of many words. However, his comedic gestures really give an insight into what kind of a man he really is!

However, fans are not as receptive to Israel Adesanya’s trash talk. Over the course of his last few fights, fans have turned their back on the dominant champion. Izzy even got trolled for applying nail polish before his fights. So it is not surprising that fans are using Alex’s pose with Elsa to slam Israel for his not-so-amusing mic skills.

How is he funny without even saying shit

Im starting to root for this guy over izzy idk

All the banter aside, the two fighters will soon come face to face during the official press conference on November 9th. After that, they will face off once more during the ceremonial weigh-ins on November 11th. They will eventually fight on November 12th inside the Madison Square Garden (MSG) for the UFC middleweight belt in the UFC 281 main event.