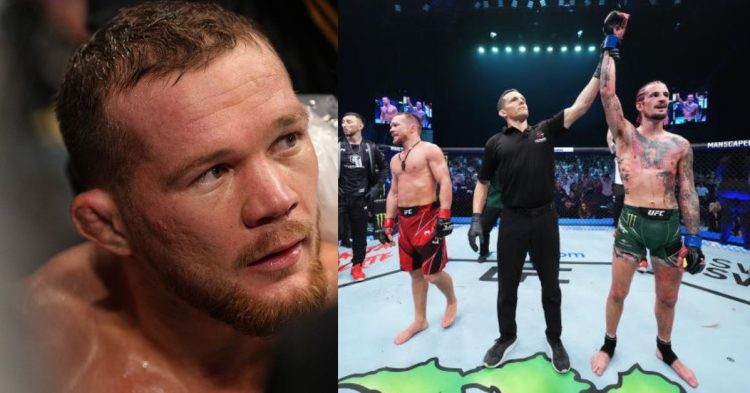 UFC 280 saw a lot of action and apart from the main event, there was another banger between Petr Yan and Sean O’Malley. Both fighters put on an absolute slugfest but in the end, O’Malley won the fight via split decision.

Following the controversial decision from the judges, fight fans and UFC stars went on to Twitter to share their thoughts. ‘No Mercy’ was very upset as this is his second decision loss, after a split decision loss to bantamweight champion Aljamain Sterling.

The result of this bout was so shocking that even O’Malley couldn’t believe that he won. However, ‘Sugar’ walked away with the biggest win of his career and silenced a lot of haters who were doubting Sean’s abilities to face an elite fighter like Yan.

Meanwhile, Yan took to Twitter after this loss and voiced his anger through three words. He wrote:

Yan was expected to beat O’Malley with ease but he had to struggle mid-fight and then resorted to his wrestling. ‘No Mercy’ also suffered a cut after eating a brutal flying knee from O’Malley. On the other hand, O’Malley has proved his place among the top contenders in the division, while Yan will now need to rebound from these losses.

Petr Yan and Sean O’Malley sent the entire crowd at Ethihad Arena to their feet after that electrifying battle. Their fight also ended up winning the ‘Fight of the Night’ title.

With this loss, Yan has fallen short and O’Malley will now get his chance at the title shot. Following the event, fight fans, critics, and professional fighters took to social media and argued about who really won that fight.

After O’Malley was declared the winner, Yan was in disbelief but so was O’Malley. UFC stars like Henry Cejudo, Chris Weidman, and Michael Chiesa were sure that Yan has been robbed.

Man… Suga showed toughness and had a great fight but he didn’t win that fight.

Wowwwwwww. I had Yan winning 30-27 but O’Malley showed he’s an elite bantamweight. I’m sold that he’ll get his hands on a belt someday. #UFC280

Yan is now 1-3 in his last four fights. He still has a rank in the P4P rankings but now he has to wait again before getting a title shot. His misfortune started when he lost the title to Sterling via disqualification at UFC 259. In his next outing with Sterling, Yan also fell short in a split decision.

Islam Makhachev Is Going to Fight Khamzat Chimaev at Welterweight After His Brawl With Abubakar Nurmagomedov?