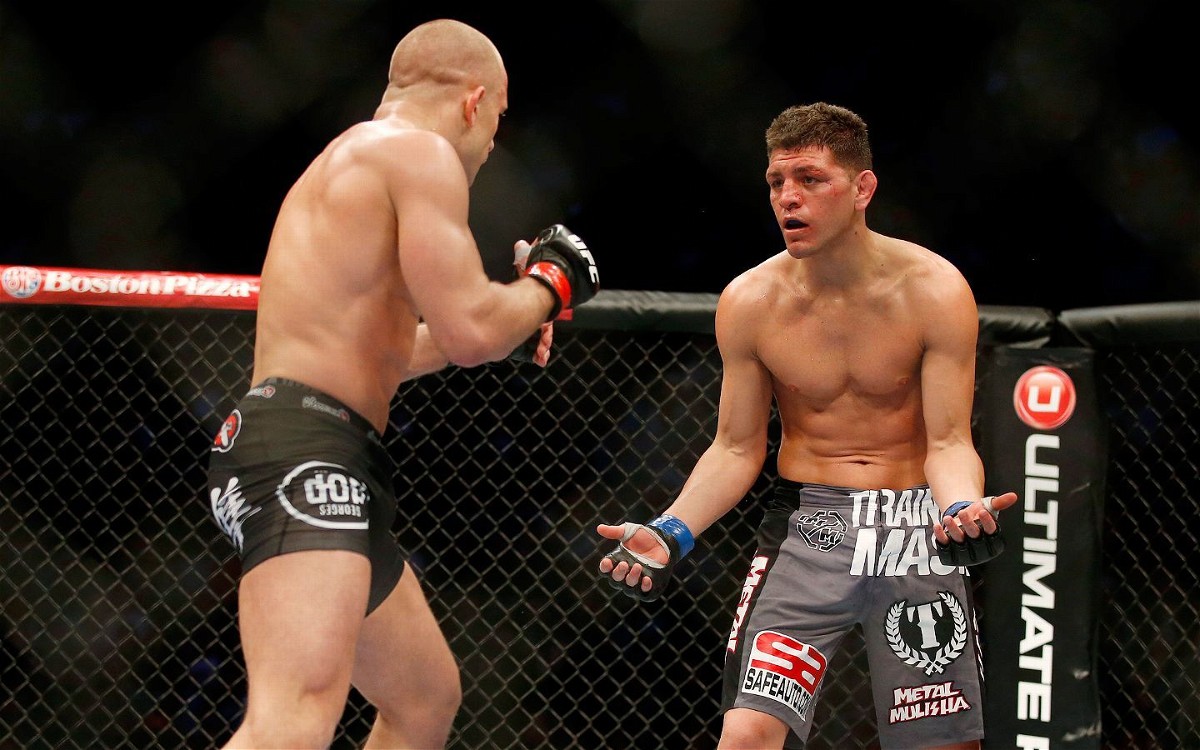 The rivalry between Nick Diaz and Georges St-Pierre was one for the ages. The former Strikeforce welterweight champion was widely regarded as one of the greatest mixed martial artists during his time. He was famous, and widely known despite having a lackluster run at the UFC. Diaz’s popularity came in the wake of his undefeated streak at Strikeforce and his notable wins against various mixed martial artists around the world.

Be that as it may, the biggest fight of his career came against the poster boy of UFC, Georges St-Pierre. Diaz shared the Octagon with the Rush back at UFC 258 inside the Bell Center in Montreal, Canada. Needless to say, the lead-up to the fight saw Diaz trash-talking St-Pierre in what was being billed as a “good guy vs bad guy” fight in the UFC.

Recently, he appeared alongside ESPN journalist Ariel Helwani and shared his thoughts on Nick Diaz. He revealed that he often regrets not making peace with the Stockton fighter.

GSP wishes he had “made peace” with former opponent, Nick Diaz.

Georges St-Pierre recorded his highest PPV against Nick Diaz with UFC 158 ranking in close to 900,000 UFC buys. St-Pierre maintains that he has never talked to Nick since then, and regrets not making peace with his former foe.

Georges St-Pierre has nothing but respect for Nick Diaz

Needless to say, because of how UFC was promoting the match-up, it irked Nick Diaz who called out UFC President Dana White for selling “wolf-tickets.” This wasn’t the only moment that has stayed with fight fans. Nick Diaz’s call-out, “Where you at George,” also made headlines, and many fans still consider it as one of the greatest moments in the history of the sport.

“It’s a little bit unfortunate. I feel like he took that not only like a business, he took it very personally. For me, it was very business.”

The rivalry was real, and Nick Diaz showed genuine dislike for Georges St-Pierre. However, knowing the type of person St-Pierre is, he was always looking for some kind of connection with his opponents considering it was just business at the end of the day.

“If I ever cross paths with him, I will go shake hands with him and say, ‘Hey, man. I don’t hold any grudge. I hope you don’t too.’ Maybe he would want to fight me out of nowhere as well.”

Georges St-Pierre has nothing but respect for Nick Diaz and rightfully so. The rivalry between the both will go down as one of the greatest in sports entertainment. St-Pierre also added that it was unfortunate that he was not able to compete in his prime years. “I hope he is okay, everything is good,” St-Pierre said.

Versace Curse: Conor McGregor, Israel Adesanya, and Jorge Masvidal Have All Fallen Prey to the Curse of the Versace Robe

What’s Next for Khabib Nurmagomedov if He Comes Out of Retirement?