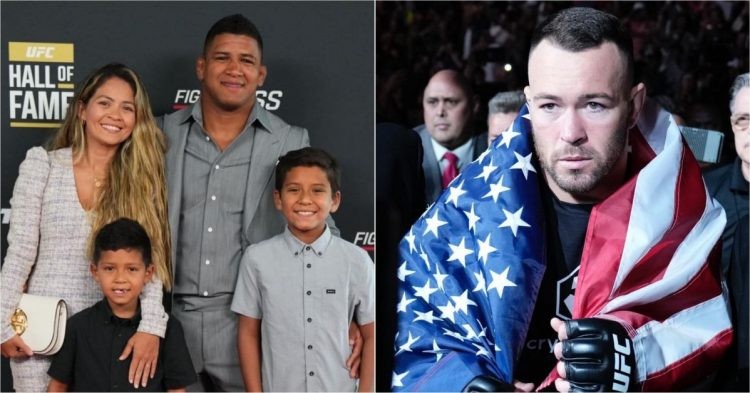 Former UFC welterweight title contender Gilbert Burns returned to action at UFC 283. After a hugely entertaining and physically exhausting bout against Khamzat Chimaev at UFC 273, Burns took on Neil Magny. While the match-up was certainly more favorable, Magny still posed a great threat to Gilbert’s position in the rankings.

However, Burns looked like a bulldozer on January 21 and submitted Magny with a head and arm choke. Magny only landed 4 strikes on the night before Burns slammed him down for a takedown pretty early on in the bout. Magny was never really in the fight and ultimately had to tap out at the 4:15 minute mark of the bout.

After fighting the 12th-ranked fighter in the division, Burns made his intentions clear that he wants to fight for the title very soon. But he needs a win over someone ranked in the Top 5 of the division, and Gilbert called out Colby Covington! During his post-fight interview with Daniel Cormier inside the Octagon, Burns revealed his intentions to make a quick turnaround.

However, he does not want to go up against just want any other fighter, but the former interim welterweight champ Colby Covington. Covington is one of the best fighters in the division and gave Kamaru Usman a run for his money on two separate occasions. He also schooled the likes of Tyron Woodley and Jorge Masvidal. In the press conference afterward, Burns made some interesting comments about “The Chaos.”

The Ultimate Fighting Championship (UFC) has many fighters who are controversial for their statements on the mic. While the likes of Sean Strickland and Conor McGregor bring an element of dark humor to the table, Colby Covington goes above and beyond anybody else on the roster. His comments about Masvidal’s family, Matt Hughes’ accident, and Usman’s father have caught him a lot of flack.

However, Covington himself previously admitted that his antics on the mic are part of his character. There was a point when UFC was allegedly about to let him go from his contract. Hence Colby developed an eccentric character who made outrageous and offensive comments. During his post-event press conference, Burns seemingly confirms that.

Gilbert continued, “And I was ready, I don’t know what’s gonna (happen). I said ‘what’s up?’ (Colby replied) ‘You know I’m a huge fan brother.’ He was super cool. I’m pretty honest right now. I don’t have to lie. He was super cool. (Colby further added), Oh I heard you fighting, I’m a character, I just wanna make money, I appreciate you, I know you have beautiful family.’ And he was super cool.”

However, Gilbert was not impressed by Covington’s lack of action inside the Octagon. Colby has not fought since UFC 272 in early 2022. Hence, Burns wants to fight him next to keep the division going. With the rumored Colby vs Khamzat Chimaev fight in doubt, the 36-year-old would be a great opponent for Covington for his return.